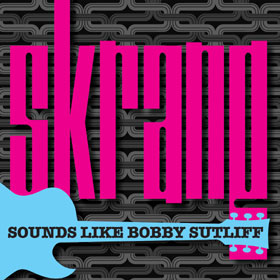 Positive things can spring from tragedy. This isn’t to suggest even for a moment that they mitigate the tragedy, or that they’re some sort of silver lining. But still.

I’m not sure how, but I completely missed the music of The Windbreakers. Often mentioned in the same breath as Rain Parade, and associated with the very best of 80s indie/retro/paisley/whatever scenes, they released five highly-regarded LPs during that decade. And they reunited in the 21st century for some further releases. But still, I never heard ’em. So much music, so little time.

In summer 2012 Windbreakers guitarist Bobby Sutliff suffered a very severe car accident, and – as is far too often the case – to add insult to serious injury, his medical bills were astronomical. So recently, an all-star collection of his friends and associates rallied to compile Skrang: Sounds Like Bobby Sutliff, a collection of eighteen songs written by Sutliff.

The thing about tribute CDs in general is that – due in part to their often zero-budget nature – the performances can have a phoned-in or demo-ey feel. Sometimes the artists involved are doing a bit of bandwagon jumping, with a goal more aligned with gaining exposure than actually paying tribute to an artist.

Skrang is the exception that proves the rule, however. It has more in common with a Yellow Pills compilation (in terms of the performance quality) or the peerless Children of Nuggets box set in terms of song quality and overall ear-candiness. The artists involved are all present for the right reasons, and have contributed top-notch reading of Sutliff’s songs. If you didn’t know better (and I wouldn’t have) you’d never suspect that these songs were all the compositional work of one man.

It does a disservice to any of the acts on Skrang to single out any of these tracks, since every one of them is worthy in its own way. But a few songs do rise to the top. Matt Piucci with members of Rain Parade turn in a reading of “That Stupid Idea” that strongly recalls (in the best possible way) The Beatles‘ “Tomorrow Never Knows.” (Rain Parade reunited for the recent Sutliff tribute show in Atlanta; I missed it, damn it.) The jangle-quotient on The Anderson Council‘s “Griffin Bay” combines the best qualities of “I Feel Fine” with Smithereens-style punch. Tom Stevens (best known as a member of Long Ryders) turns in a windswept version of “Bitter Fruit” that brings the song’s c&w vibe to the fore while still jangle-rocking. Michael Carpenter raves things up with “Long Red Bottle of Wine,” a strong contender for the best song on the whole set, thank to its perfect balance of riffage, jangle (yep, lots of jangle on Skrang) and creamy vocal harmonies. The same can be said of Koenig’s Road‘s “Ghost Town.”

Skrang (the title is a Sutliff word-coinage for “the sound of an open chord on an electric guitar”) is quite successful as a collection of great songs from a wide array of artists; a suitable showcase for the songwriting talents of Bobby Sutliff; and, if you buy it, a way to help defray at least in part the guitarist’s medical expenses. What’s not to love?