Across many traditions, December is the height of the gift-giving season. I’m here to tell you that for the music lover in your life – at least one who appreciates off-the-beaten-path music of days gone by – the perfect gift is now available. It’s called Surf Age Nuggets: Trash & Twang Instrumentals 1959-1966, and title tells you nearly everything you need to know. More than hundred instro-rockers are collected on four CDs, and unless you’re the hardest of hardcore surf-rock aficionados, you won’t know more than a very small handful of these tracks. 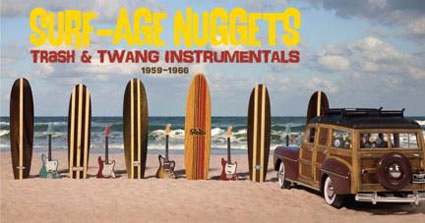 Seemingly the choice of what to include on Surf Age Nuggets gave equal weight to two factors: performance/arrangement (though not sonic) quality and relative obscurity. How else to explain that these tracks – most of which were from 45rpm singles and never appeared on any long-player of any sort – are so incredibly obscure. Think of Surf Age Nuggets as the Pebbles of surf-rock. All manner of goofily clichéd band names are here: The Tradewinds, The Sting Rays, The Newport Nomads, The Elite UFO – and the relatively lo-fi production aesthetic (no Phil Spector vibe here) is generally a bit harsh on the ears.

But as a document of stuff-you’ve-never-heard, Surf Age Nuggets is a real gem. While modern-day exponents of the genre (most notably Los Straitjackets, and, briefly The Sadies) do an admirable and invaluable job of keeping the style alive, these kids (and they were most often just that: kids:) twang their Fenders without a trace of irony. Riff-rockers awash in reverb are the order of the day across some five hours of instro-rock on Surf Age Nuggets. If you like this kind of thing, you’ll love this. If you don’t like surf-rock, you’ll have a headache fifteen minutes into the first CD.

If the music were all there was on Surf Age Nuggets, it would be enough. But no: the packaging is amazing. While Rhino pretty well set the standard for lovely compilation packages with its Love is the Song We Sing: San Francisco Nuggets 1965-1970 and Where the Action Is! Los Angeles Nuggets: 1965-1968, they have since surrendered to what they see as the handwriting on the wall, largely abandoning the lavish packaging format. But Rock Beat has picked up the baton with Surf Age Nuggets. The heavy hardcover book format houses the discs in a user-friendly manner, and the splashy pages inside are a treasure, filled with vintage photography, ads of the era, and liner notes that make the most out of what undoubtedly was generally very spotty historical/discographical information about this delightfully motley collection of no-hit wonders.

Come to think of it, go buy this set for yourself, and tell your friends to get their own.