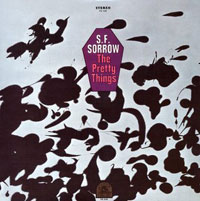 The 1968 album S.F. Sorrow by The Pretty Things is an exemplar of a band, pushed to the wall, rising to the occasion and producing a classic. Prior to this, the Pretties were thought of as more-Stones-than-the-Stones, with their raw, r&b-based rock. S.F. Sorrow would change all that. The loose narrative is based on a short story by guitarist Phil May; nobody would claim that the story was focused, but then the same could be said of The Who’s Tommy, a work admittedly influenced by S.F. Sorrow.

The music is by turns rocking, folky (in an English way) and psychedelic. Yet it’s fully grounded. The group drew upon latent abilities to create a work rich in harmonies, instrumentation and dynamics.

The 2008 release on Sundazed is extra-special. Pressed on virgin vinyl in a beautiful blue hue from the original analog masters, it’s a clone of the original US release. Every detail is perfect, right down to the gatefold sleeve. The word “STEREO” appears in big letters, just like in ’68. The only concessions to modernity are a tastefully-placed Sundazed logo and a UPC code (or “mark of the beast” if you’re Pat Robertson).

But none of that would matter if S.F. Sorrow weren’t an amazing album. It is. It’s a time capsule that takes the listener back to one of 1968’s best releases.