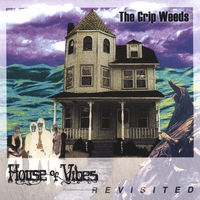 The 1980s and 90s saw the rise of a rock subgenre/movement dubbed the “paisley underground.” Populated by groups who bowed at the altar of mid-period Beatles and the other finer psych-rock of that era, many of these groups were called to task by critics for their (some said) too-slavish devotion to the sounds of old. As the argument went, they didn’t offer anything new. But some of the best (The Bangles, Rain Parade, Plasticland) had moments where their original tunes held their own against the older stuff. Eventually the paisley underground era faded, as did many of its leading groups. But in 1994 The Grip Weeds came on the scene, offering a newer twist. They captured the vibe of the early pop/rock/psych, but they didn’t attempt to ape the sound, and — most importantly — their songs were top notch. The Grip Weeds continue today, turning out excellent albums every few years. Now their first album House of Vibes gets the reissue treatment, with a fresh remix and a sampling of live-on-the-radio and acoustic bonus tracks. Not merely for genre fans, this is a disc that belongs in the collection of any fan of melodic, driving rock.