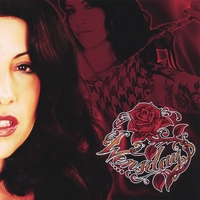 Picking up Torch Rock™, one would expect an outing not dissimilar to late 70s/early 80s efforts by Karla DeVito and Ellen Foley; there’s a mock-operatic approach to the proceedings, much like the sort of music Jim Steinman composed for Meat Loaf’s Bat Out of Hell. And the master of ceremonies here is the estimable Dick Wagner, well-known and admired for his work on Lou Reed’s Rock N Roll Animal (that’s him as co-lead guitarist on the epic intro to “Sweet Jane”), and albums by Alice Cooper and KISS.

It might be a mischaracterization to call this Wagner’s album, but there is evidence to support that assertion. The guitarist/producer is credited or co-credited as composer of every track, and his playing, arranging and production is all over the album. (The album’s putative front person Wensday co-wrote seven songs.) Wensday’s pipes are impressive enough, and Wagner’s clean production applies shockingly little treatment/effects to the vocals, suggesting that Wensday is every bit as fine a singer as she sounds on record. And that’s saying something.

The arrangements — mostly midtempo — have enough going on to provide interest, all in the service of the vocal. The problem is that in 2008 there doesn’t seem to be much of a market for this kind of thing. Last I checked, nobody actually asked for a modern take on romantic pomp-rock. And calling the album Torch Rock™ — yes, they’ve trademarked the term — is more than a little pretentious.

Still, this is a quite pleasing offering for fans of this style. But said fans likely don’t number enough to make a financial case for a followup.