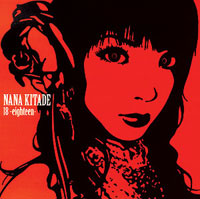 On the leadoff track of her album 18-eighteen, J-Rocker Nana Kitade sounds like some wonderful combination of Pizzicato Five, the Go! Team and the grooviest Target commercial one can imagine. With its infectious grooves, insistent beat and sticky melody, “KISS or KISS” casts a spell so wonderful it matters not a bit that the listener can’t understand her Japanese lyrics.

Admittedly, “KISS or KISS” does lose a slice of its allure when Kitade sings it in English (on the bonus track); she betrays very little of a Japanese accent. The English version is thus a bit ordinary, but only a bit.

The tunes unfold in a manner familiar to fans of rock’s more melodic side. And as a real bonus in the world of vocal-oriented rock/pop, 18-eighteen features actual musicians playing real instruments. The guitar solo on the opener is as melodic as anything to come out of the 70s rock or new wave movements, and the keyboard sounds run an effective gamut from cheesy 60s Farfisa sounds to hammering acoustic pianos to Cars-influenced monosynths.

The debut album was released in Asia in mid-2005 but saw a well deserved re-release in the west in late 2006. The overall mood of 18-eighteen is exuberance. It’s rock pop, but of a caliber several notches above most of what aspires to that label. 18-eighteen should be equally at home with dancing as with air guitar soloing. Prospective listeners should not be put off by the Japanese lyrics; this is fun, angst-free stuff that rocks.