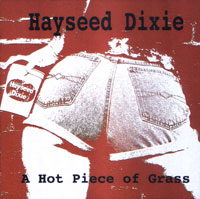 Hayseed Dixie is bluegrass music’s answer to Dread Zeppelin. But then, who asked the question? Hayseed Dixie’s high-concept approach recasts hard rock songs in a bluegrass context (for a secret message, say “Hayseed Dixie” out loud, over and over, until you get it).

These guys most certainly have a sense of humor — how else to explain a bluegrass reworking of Black Sabbath’s “War Pigs,” replete with banjo, fiddle and mandolin. Hayseed Dixie moves beyond the major-chords-only confines of bluegrass, interpreting the nuances of rock’s warhorses in a fresh way. Jimmy Page’s descending guitar groan on Led Zeppelin’s “Whole Lotta Love” is presented here as a screeching fiddle. Green Day’s “Holiday” is retooled as a reel-around-the-campfire singalong.

The second half of A Hot Piece of Grass presents a clutch of originals. In a sense they suffer from loss of the rock context; measured on their own merits, they’re great tunes. The album wraps up with an breakneck-paced rendition of “Dueling Banjos” (coauthored by the daddy of mandolin axeman Deacon Dale Reno).

Hayseed Dixie moves all at once toward both hard rock and traditional Appalachian music, doing so with intelligence and wit. The liner notes are a hoot as well. A facsimile of the band’s stage setup plans is included, clearly delineating the required location (and contents) of the onstage beer cooler. And the copyright statement has been reworded to admonish that “unauthorized duplication is prohibited, is not very sporting, and may well result in a full on East Tennessee ass whooping.”