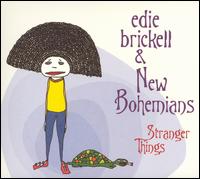 Edie Brickell is back. Actually she never left. While she recorded and played with New Bohemians in the early 90s, she dropped the band for her ’94 and ’03 releases. Her latest release, Stranger Things, finds her reunited with a slightly altered lineup of the group.

Brickell’s music still maintains its hallmark navel-gazing, sounds-like-she’s barefoot vibe, but the song structures are rock-solid. This is the sort of album a rock fan could comfortably listen to with their soft-rock-loving friends (Natalie Merchant fans, you know who you are) and not have to shift uncomfortably in his or her seat, waiting for the merciful fadeout of the final track. The tunes have their hooks, especially the title track, “Mainline Cherry” and the chugging “Long Lost Friend.” And “No Dinero” cops a Latin vibe without sounding like cultural plundering. In fact there’s nary a misstep on the disc. Brickell’s voice is more controlled and assertive than ever. The contemplative “Buffalo Ghost” is perhaps the closest thing to what Brickell and the old New Bohemians did back in 1989 in the days before she met Paul Simon (factoid for those who might’ve missed it: Edie Brickell — not Art Garfunkel — is Simon’s wife).

In the adult-contemporary marketplace, this is as strong as it gets. Who would’ve thought such a thing would come from an artist who enjoyed her biggest success a decade and a half ago? As Brickell notes (apparently without a trace of irony) on the title track, stranger things have happened.