Flaming Lips: The Sound of Success 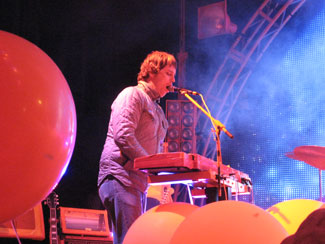 With the charismatic Wayne Coyne fronting the Flaming Lips, it’s easy to overlook the articulate creative expression of Steven Drozd. Steven joined in 1992, ostensibly as their drummer — but quickly assumed the role as a prime mover of all things musical. The relentless contributions of this multi-instrumentalist are a major influence within the ever-expanding sonic canvas that is The Flaming Lips. Their newest disc, At War With the Mystics is the latest proof.

The Lips’ music is emotionally manipulative, similar to the way that a great film plies the viewer’s emotions. Drozd allows that this is “absolutely intentional. From my own creative standpoint, the things that I like to communicate musically are purely emotional.” He describes the creation process: “here is this melody, here are these chords, which inherently give the listener something. I’ll tinker; I’ll actually change each individual note — I’ll work on it for days trying to concoct the most powerful melody I can. We are always, actively, trying to do that.”

All our energy and focus is spent on making our live show as bombastic and bad-ass a spectacle as possible.
–Steven Drozd

Drozd contends that the success of their 1999 release, The Soft Bulletin, did not add pressure for the group to produce more of the same. “There’s no pressure from Warner Brothers; they let us do what we want. Any pressure comes from within us.” Their followup, 2002’s Yoshimi Battles the Pink Robots marked continued musical exploration, with increased use of loops and samples. Still, says Drozd, “the new record is more three-dimensional than Yoshimi. I think it’s got more depth to it in a lot of ways.”

Steven muses on the challenge of continually coming up with something new and compelling: “Even Stravinsky probably had these things that he sort of did again and again! I love the major-seventh chord. I can sit there and play that all day long,” he laughs. “On this record, initially it didn’t seem like we were doing new things…and then Wayne came up with the riff for ‘The W.A.N.D.’ And then we realized, ‘wow! This is like guitar rock,’ which we hadn’t done in a few records. And that seemed like a fresh approach.” 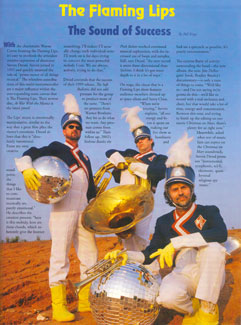 Onstage, the circus that is a Flaming Lips show features lucky audience members dressed up as space aliens and Santa Clauses. “When we’re touring,” Steven explains, “all our energy and focus is spent on making our live show as bombastic and bad-ass a spectacle as possible. And it’s purely entertainment.”

The current flurry of activity surrounding the band — the new album, the tour, Jim DeRogatis’ book, Bradley Beesley’s documentary — is only a taste of things to come. “We’d like to — and I’m not saying we’re gonna do this — we’d like to record with a real orchestra and choir. But that would take a lot of time, energy and concentration. Between this tour, and trying to finish up editing on our movie Christmas on Mars, that’s plenty for us right now.” Meanwhile, asked what sort of music fans can expect on the soundtrack album, Steven Drozd promises “instrumental, symphonic, sci-fi, electronic, quasi-hymnal religious spy music.”