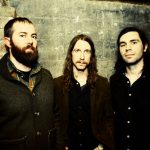 In a valiant attempt to provide helpful points of reference for music listeners, journalists have concocted all manner of genre labels. Some – folk-rock, for example – are useful in describing a style of music. Others are virtually meaningless. So it is with post-rock, a term first used in the mid 1990s to describe music
Read More
“Uh-oh.” That was this reviewer’s audible response a few seconds after dropping the needle (so to speak) on Russian Circles’ debut disc. And by a minute or so into “Carpe,” the dread was still at hand: would some screamo/emo/metal singer soon kick in with his tales of angst and woe? After two minutes, a curious
Read More