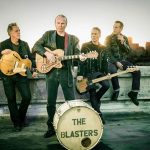 At a time when rock music was taking a turn away from bloated arena rock toward stripped-down punk (and its commercial successor, new wave), the Blasters came onto the national scene with an even more rootsy approach. Led by brothers Phil and Dave Alvin, the group came from Downey, a city in metro Los Angeles.
Read More