In 2010 I conducted a long list of interviews, and I can honestly say that I enjoyed every single one of them. Some were in-person; some were phoners, and couple used Skype. In every case I believe I came away with a better understanding of what makes the artist tick. But a few interviews stood
Read More 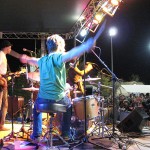