CD Review: The New Mastersounds – Breaks From the Border 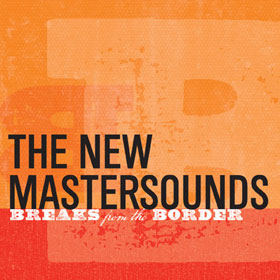 There’s a tradition – maybe not a proud one, but a tradition nonetheless – of not messing with that which works. “If it ain’t broke, don’t fix it,” goes the old saw. Yet for artists who are serious about their art, pushing the boundaries is essential. To keep themselves alive creatively, change and growth are essential. And generally speaking, fans of the more compelling artists will be (or at least try to be) open to these changes, understanding the artist’s need to keep moving forward.

Since their inception, UK sensations The New Mastersounds have been an instrumental quartet. Eddie Roberts’ speedy/jazzy guitar work, coupled with Joe Tatton’s tasty keyboard work (mostly, but not exclusively on the Hammond organ) have been ably supported by the precise yet grooving and driving rhythm section of bassist Pete Shand and drummer/court jester Simon Allen. Onstage, one of the four might take an occasional vocal, but for the most part, The New Mastersounds kept their mouths shut.

Not so on Breaks from the Border. Branching out while maintaining all of the sonic elements that have made them so successful, the foursome serves up vocals on several of the album’s tracks. In fact, “all four boys sing,” like it used to say on the back of early Beatles albums. And they do so surprisingly well for a group that has established itself as an instrumental outfit.

Not that they didn’t get some help. Though she herself does not appear on the disc, Rhianna Kenny wrote the lyrics to the five songs that have words, and Kenny handled all of the vocal arrangements as well.

Musically, Breaks from the Border represents a continuation of the styles the band showcased on its earlier releases; it’s just that now, instead of featuring guest vocalists on selected tracks, The New Mastersounds are expanding their bag of tricks within their self-contained unit. There’s a chanting vibe to many of the vocals (see “On the Border” for evidence), and that approach will likely receive a warm welcome among the group’s jam-band fan base. While the New Mastersounds aren’t necessarily a jam band – their arrangements are tight yet airy – their loose-limbed aesthetic pleases that contingent (among others, thankfully).

“Free Man” is a different bag altogether. The song swings and moves in a George Benson-meets-Steely Dan at Stax kind of way. When Pete Shand (I think it’s him) calls, “Come on, take it lads,” he means it: this is fun stuff. That sounds like Si on “Passport,” and the vibe is delightful in any language.

The Booker T & the MGs vibe is still there, tempered as always with a jazzier outlook. The vocals simply add yet another dimension to this fun and fascinating foursome’s palette.