Today’s five – all new music – are all within the (very loosely defined) jazz idiom.

The New Mastersounds – Therapy
At every turn, this Leeds-based group finds new and exciting ways to expand upon their original brief: soul-infused boogaloo music. Pleasing jazz fans, the noodle-dancing jam band crowd and general-purpose festival crowds all at once is a tall order, but The New Mastersounds deftly achieve that goal. On Therapy, the group delivers a dozen original tunes heavy on soul and groove; fans of their earlier material will recognize the signature style, but they’ll also find some surprises. The heavy yet downtempo soul stew of “Old Man Noises” owes as much to Jimi Hendrix or Brian Auger as to modern trip-hop. 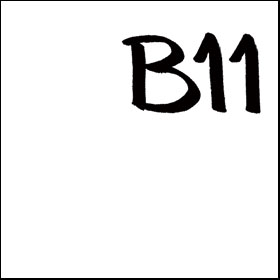 B11 – B11
This (nominally) jazz trio plays pop-jazz and originals in a style that feels more post-rock or even metal in places. A reading of Henry Mancini‘s “Peter Gunn Theme” is rendered in slowed-down super-heavy style. B11 covers Mancini’s “Pink Panther Theme” even slower. And the heavily reverbed “Moon River” sounds like Chris Isaak played at 16 RPM. ( Lou Donaldson‘s “Alligator Boogaloo” gets similar treatment. But the original tunes cover a wider palette, from spaghetti-western instros to excursions into bolero, waltz and such. The no-lyrics, downtempo vibe makes B11 suitable as groovy background music, but it’s a fun intentional listen too. 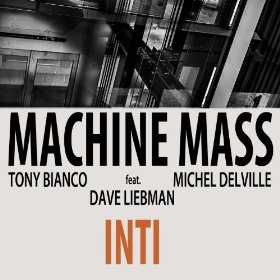 Machine Mass – Inti
It’s fascinating to observe players constantly on the lookout for new direction in which to push the jazz idiom. Machine Mass features electric (and often heavily processed) guitar from Michael Deville, plus drums (and loops) from Tony Bianco. Together they make a sort of avant-garde kind of sound. But acclaimed saxophonist Dave Liebman adds his innovation to the mix, making Inti more of a jazz/post-rock hybrid. In the liner notes, Bianco describes the trio’s approach as “improvising over structures.” In practice this means that there’s a cohesive foundation for all nine tracks, but what happens within each piece is unpredictable. 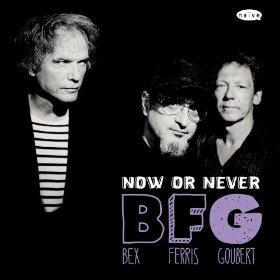 Bex Ferris Goubert – Now or Never
This trio is so French that the liner notes aren’t even in English. But music is indeed the universal language, so these musicians on Hammond B3 organ, trombone and batterie (that drums to you and me) get their point across in a way that most everyone can understand and appreciate. Deconstructions of “Take Five” and Thelonious Monk‘s “Bluehawk” stay true to the jazz aesthetic of not saying true to the original arrangement, and the live recording (captured by a mobile unit in an intimate crowd in Paris’ Sunset Club) captures the group’s winning yet uncompromisingly idiosyncratic approach to good effect. 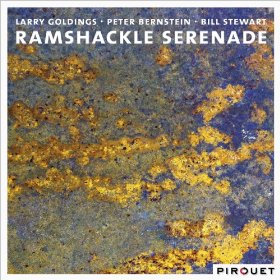 Larry Goldings, Peter Bernstein, Bill Stewart – Ramshackle Serenade
With a more conventional lineup (Hammond, guitar and drums, respectively), this trio plays snaky, subtle tunes – six originals plus three covers – all of which are understated yet expressive. At times, the trio seems ready to take off into a heavier, faster tempo, but they keep it mostly in a head-nodding, pensive manner throughout the disc. In particular, Bill Stewart’s loping drums hold the emergency brake on the other two, reining in any tendency they might have to cut loose. Those looking for excitement are advised to keep moving; nothing to hear here. Still worth a listen.