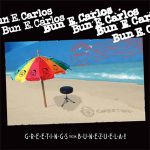 File next to: Guided by Voices, Cheap Trick, Paul Revere and the Raiders In the wake of a confusing and bitter divorce from his band of many decades, former Cheap Trick drummer Bun E. Carlos has put together his first solo album. Carlos (born Brad Carlson) doesn’t sing, and he’s not a songwriter. What he
Read More