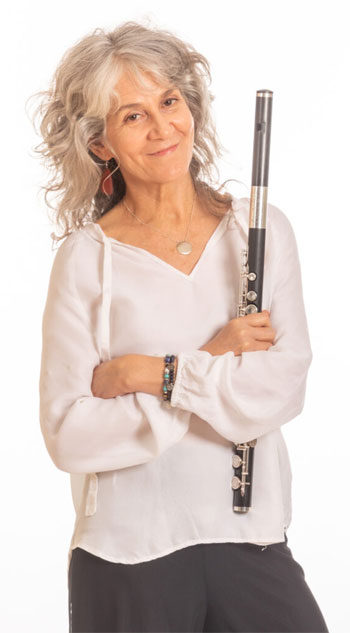 Kate Steinbeck doesn’t remember a time when she didn’t want to play the flute. “I think I was haunted by it as a child,” she says. When she was in junior high school, the band director told students, “Don’t play the flute; there are too many flute players.” So she chose the trumpet. “But then,” she laughs, “in the parking lot at the music store, I realized, ‘I don’t want to play trumpet!’” Soon afterward, she decided on the flute. And the decision stuck.

“The red wine being the wooden flute,” she emphasizes. “There’s a beautiful density to the sound, the high register is not shrill, and it has more overtones.” But Steinbeck has been playing the wooden flute for so many years that to her, it’s just a flute. “So I ask the audience, ‘What do you think?’”

By all accounts, they like it. For more than two decades since moving to Western North Carolina, Steinbeck has been a popular fixture of the chamber music scene. And that’s all the more impressive because she started from scratch. “I was challenged by what I saw here in the genre,” she explains. “I thought, ‘If I’m going to thrive here as an artist, I’m going to have to create my own situation.’”

Steinbeck and a partner launched an ensemble, Keowee Chamber Music, and in 2001 they launched an annual music festival. Keowee Chamber Music Festival gained nonprofit status in 2004, but from the beginning it had altruistic goals. “What’s really important to me is that everybody has access to [this music] if they are at all curious and want to come out,” Steinbeck says.

The organization was re-branded as Pan Harmonia in 2011; the name change reflected Steinbeck’s playful demeanor that informs her approach to music and life. “I solicited my audience for suggestions, and somebody said, ‘What about something to do with Pan?” Referencing the flute-playing satyr of Greek mythology made sense, but as a name, it felt incomplete.

Steinbeck’s son was 13 at the time, and he suggested Pan Harmonia. “Those are two gods,” she points out. Harmonia is the daughter of Ares, Greek god of war, and Aphrodite is the goddess of love. “Pretty crazy parentage,” Steinbeck observes. “So I went with it.”

Even today, Steinbeck endeavors to make performances accessible to as many people as possible. “During the pandemic, it was such a dire, dark time,” she says. “I talked to the universe and said, ‘If we get through this, I really want to make this free-access for people.’” She instituted a pay-what-you-can model for her performances. Noting that Pan Harmonia really had that policy all along, she says that “We just didn’t advertise it.”

Kate Steinbeck’s musical collaborations with pianist Dewitt Tipton go back years. “He’s a sublime musician,” she says. “One thing I particularly appreciate about him is that he has a lot of experience with singers.” Steinbeck explains that the musical pacing of a flutist is quite similar to that of a vocalist.

“Kate and I have a bond, both musically and personally,” Tipton says. “It seemed the right time to have her share her enormous gift with our wonderful community.” The December 4 Friends of Music program featuring Steinbeck and Tipton revisited works the duo has played in the past.
“We’re playing some Bach,” Steinbeck says. “And we’re playing a piece by French composer Albert Roussel called Joueurs de flûte, which means ‘flute player.’” Steinbeck says that whenever possible, she endeavors to include works by lesser-known composers who deserve a wider hearing. “I’ll probably play a solo, too,” she adds with a mischievous chuckle. “But I haven’t told Dewitt that yet!”

The Friends of Music concert/recital program was launched in 2014. While it’s hosted by the Episcopal Church of St. John in the Wilderness, the series is outside the church’s budget; it’s funded by music-loving parishioners and the community.

“Dewitt has created a nice series this year,” Steinbeck says. “And I’m very touched to be a part of it.”