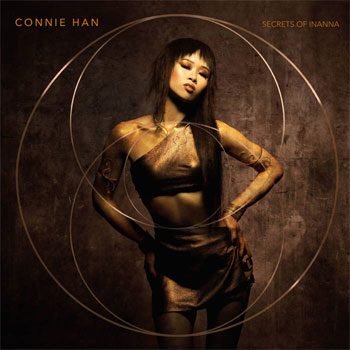 There was a time when jazz was edgy, boundary-pushing and even threatening (albeit in a good way). Some may disagree, but other than free jazz – which is frankly too forbidding for even most in the already tiny slice of the market that is jazz aficionados – much of today’s jazz isn’t earth-shaking.

Sure, there are plenty of exceptions. And the persona and music of Connie Han fall into that category. Pianist Han demonstrates breathtaking technique on piano (and electric piano) throughout Secrets of Inanna. Her music can be thought of as a modern-day take on ‘70s spiritual jazz of Alice Coltrane, Pharoah Sanders and other innovators, but her approach is more rooted in accessible melodic concepts.

That said, Han isn’t afraid to head out there on tracks like “Ereshkigal of the Underworld,” with complex percussion lines crisscrossing her glistening, assured runs across the ivories. Bassist John Patitucci is on hand to provide a complex, sympathetic and intriguing bottom-end, and his crackling yet subtle instrumental dialogue with drummer Bill Wysaske is thrilling.

As it happens, Wysaske (who’s also her producer) taught Han music in high school. But the pianist didn’t continue her formal musical training beyond 12th grade, and all available evidence suggests that she made the right call to simply get on with her career.

And Han is the star of this show; her keyboards are at the center of every piece, and her skill, power and finesse are on unyielding display across all twelve tracks. Han composed about half of the album’s material; Wysaske wrote a few, and there’s a Chick Corea cover (“Desert Air”) for good measure. And it all hangs together. And tracks like “Morning Star” demonstrate that Han can take the music in traditional (bop, for example) directions whenever she chooses, all without losing the plot of the album as-a-whole.

It hurts not a bit that Connie Han is – there’s no other way to put it – a stunner. Take a look at the album cover art (or most promo photos) and you’d be forgiven if you didn’t guess that she’s a jazz artist. She’s also a 26-year old jazz artist whose latest record is her fourth(!) so expect to hear – and see – much, much more from this richly talented artist.