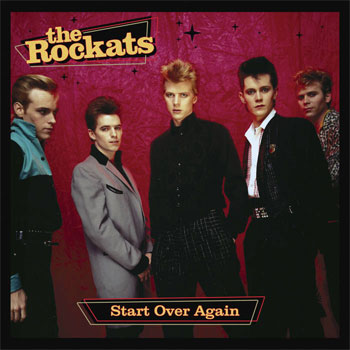 The ‘80s alternative music scene brought with it a few revivals: the Paisley Underground reconstituted the West Coast jangle-psych with bands like the Long Ryders. And a roots/rockabilly revival got underway, spearheaded by bands like The Blasters, The Stray Cats and the recently-departed Robert Gordon. Part of that latter scene was The Rockats. First known as Levi and The Rockats, the group predated most of those other names’ entry into the scene. The Rockats were led by an actual Teddy Boy, Levi Dexter. He left the group in ‘79, and the other members continued with their special brand of neo-rockabilly. The band released a string of singles and albums up through 2013, but noting was heard from them on record after that.

Until now, that is. The pointedly-titled Start Over Again reintroduces the rockabilly pioneers to current-day audiences. The band – Dibbs Preston on vocals, Danny B. Harvey on guitar and keys, guitarist Barry Ryan and upright bassist Smutty Smiff – tears it up on these tunes, with sparking yet intimate production and a sound that captures all the fun and fire of classic rockabilly.

The group doesn’t have a permanent drummer; for this collection of 12 songs, they’re joined variously by three drummers; Blondie’s Clem Burke is the most well-known among them. Harvey and Ryan take turns with the lead solos; their styles are complimentary but different enough that both are welcome in the context of these compact tunes.

Preston’s sonorous vocals have the right amount of swagger, and The Rockats never sound like they’re delivering shtick; they play with conviction, and you can hear it in the grooves. A pair of tunes at the end of the set date from 1980; “Rockabilly Doll” b/w “Tanya Jean” date from the period when Tommy Darnell was on the drum kit. Those two tunes sound a bit different than the current band, but the spirit’s the same.