That was Neal Schon’s response to the opening question in our recent conversation. The question sought to explore the guitarist’s perspective on the career trajectory of Journey, the multi-platinum selling band that he co-founded in San Francisco in 1973. Journey is best-known for its decade-long commercial peak, a time when the group was fronted by lead singer Steve Perry. 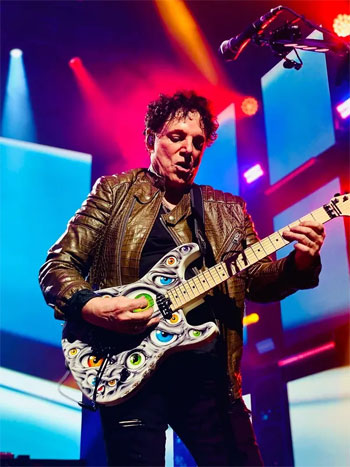 Between 1978 and 1987, Journey was on top of the pop and rock music world. The band’s fourth album, Infinity propelled Journey to the top of the charts, and featured a pair of hit singles, “Wheel in the Sky” and “Lights.” The latter, a prototypical power ballad co-composed by Perry and Schon, was a slow burn, initially peaking at #68 on the Billboard singles charts. But the tune’s popularity grew, pulling the band along with it. Today it’s widely considered a classic.

Previous Journey releases sounded quite different from these new songs. And Schon admits that he had reservations about the change when Perry first joined the group. “But when I finally got in a room with him, he and I knocked out our first song it in about 20 minutes,” he recalls. “And it was immediate chemistry.”

By the late 1970s, Journey had hit on a successful formula, and they pursued it as determinedly as possible. It wasn’t simply the record-buying public who were impressed with Journey’s brand of melodic, emotionally-charged arena rock. For the most part, the critics were on board, too.

But the Journey of those years bore little resemblance to the group that Schon and four other musicians put together in the early ‘70s. At its start, Journey was a musical hybrid, a grab-bag of hotshot musicians who had fled other bands in hope of making their mark with something new.

In February 1973, Schon had just left the massively popular San Francisco band Santana. He enlisted bassist Ross Valory, formerly with the Steve Miller Band, for his new group. Drummer Prairie Prince left the Tubes to join the new group, though he soon returned to his old band in time to appear on their debut album. And Schon’s Santana band mate Greg Rolie joined the new group a few months later on keyboards.

The Journey of those days – as heard on the group’s self-titled 1975 debut, 1976’s Look into the Future and Next from 1977 – was a progressive-fusion band. Early Journey showcased the instrumental and compositional prowess of its members, and while Rolie was nominally the lead singer, vocals were not a top priority.

Rolie, Schon and Valory provided the instrumental backbone of those days and beyond, with assorted other members coming and going. And by fall 1977, the band had added Steve Perry to its lineup. Then in his late 20s, Perry had a powerful tenor voice. He also brought with him an accessible songwriting style; eight of Infinity‘s ten songs would feature a Perry co-credit.

With Perry on board, Journey’s progressive inclinations were set aside, and largely forgotten. The Steve Perry era defined what would become the group’s signature sound. Today Schon acknowledges that “the younger audience is not aware of our earlier records.”

But there would be no denying the appeal of the “new” Journey. To be sure, each of their meticulously-produced albums would hold together as a cohesive work. But it was on the singles charts where Journey would truly make their mark. After that initial modest success in 1978 with “Lights,” the band – like the none-too-subtle metaphorical ships and creatures on their dazzling album covers – took off for the outer limits.

Though the production on those records is highly polished and of its time, the music breathes. And Neal Schon gives much of the credit for that to lead singer Perry, a former drummer. “Steve was a master at manipulating time,” Schon says. “He knew how make things sound faster, even though they weren’t. I learned a lot from him.”

But nothing lasts forever, and today there’s a long list of former Journey members who might have less-than-complimentary things to say about working with Steve Perry. By the time of 1987’s Raised on Radio, longtime drummer Steve Smith and founding member Valory had been summarily fired by Perry. Rolie had left by 1980, replaced by Jonathan Cain, formerly of pop group The Babys.