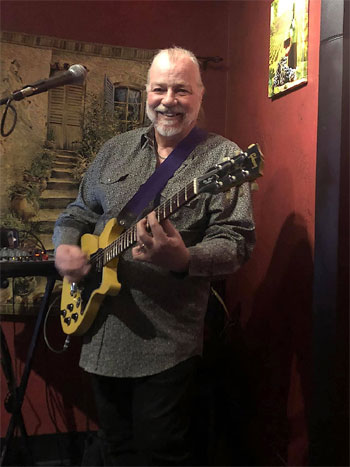 Dale Pone (pronounced PAW-nay) is a Nevada-based singer, songwriter and journeyman musician. A lifetime player, Dale’s musical adventures have seen him performing around the globe, at world-famous amusement parks, on themed cruises, and with hit artists from a wide variety of musical genres. His own original music touches on nearly every style, and for many years now he’s been teaching guitar to a remarkably unusual set of students. Just ahead of a trip to Nashville’s Grand Ole Opry, Poune took time to chat with me.

How did you get your start in music?

I started back in the ‘60s. The Beatles got me excited, then I discovered the Rolling Stones. And that was a portal to B.B. King, Johnny Winter and The James Gang. I played the bass through most of the ‘70s; I learned how to play keyboards as well. Then one night [after a gig] I saw the guitar player with just his amplifier and his guitar: “See you later!” Meanwhile, I had four large keyboards and all the stuff that goes along with that. So I said, “That’s it! I’m playing guitar from now on. This is too much work.” [laughs]

You came up in the L.A. music scene, didn’t you?

Yeah. I worked solidly through the ‘70s. One of my first real gigs was with The Kingston Trio; their bass player broke his hand, and they needed somebody to come in and fill in for a few weeks. The thing about the ‘70s that’s different from nowadays is that the [musicians’] union was real strong. One time, the union called me up and said, “Hey, this band needs a bass player who plays a little guitar. Go down, audition, sing a couple songs, and you’ll probably get the gig.” So I played Disneyland for a while.

Listening to random selections from your body of work (on Spotify, Soundcloud and elsewhere), there’s country, bluegrass/Americana, rock, blues, reggae-flavored songs, and even urban r&b. You’re clearly comfortable in a wide variety of musical styles. Which is the “real” Dale?

I’m a rocker, a blues player at heart. But for the last few years, I’ve played with a lot of country artists. I’ve played with Paulette Carlson, Dave Frizzell and Johnny Lee. I get the job done, and that’s what’s important.

I also perform with Doug Sandall. We went on a country cruise earlier this year; we played with T. Graham Brown, The Bellamy Brothers. We’re together in the studio now.

Listening to the country-flavored tracks that you have recorded, I just assumed that you were immersed in country from an early age…
When I wrote those songs, it was just something that was in my head, so I wrote it. Like everybody else wants to do, I’d like to get a hit – or at least get a song on [somebody else’s] hit album – and make a few bucks. But it’s like fishing: you’ve got to find the right spot.

You also play with country and western hitmaker Lacy J. Dalton. How did you connect with her?

I had been on the road with The Fortunes [best remembered for “Here Comes that Rainy Day Feeling,” a Top 40 hit in 1971] for quite a few years, and I had to come home to settle some personal matters. So then I was playing guitar in a rock band called Cool Black Kettle. I had a huge Marshall stack [amplifier].

I’ve always been a musician, so you find some way to survive; whatever that’s going to take. Lacy lives here in Virginia City, Nevada. She had several hits in the ‘80s and ‘90s, but when I went to audition, I had never heard of her. Now I’ve been playing with her for more than 12 years! Even though she had her hits as a country artist, what we do is more like high energy acoustic music.

We’re going to go to Nashville in October; she’s going to get the Josie Music Award for [Top 40 country hit single] “16th Avenue,” which is 40 years old now. We’re going to play a couple songs in the Grand Ole Opry.

You write and arrange your own music. But when you work as a sideman for Lacy J. Dalton or other artists, everything you’re doing is in service of their artistic vision as opposed to your own. How do you approach that differently?

It’s about business, and about getting along with other people. And it’s just survival. It’s just like a long time ago when I stopped taking drugs and drinking; it was just self-preservation. And self-preservation is being a sideman, the best sideman you can be. You don’t worry about, “This isn’t my thing.” You’re just trying to make them sound good, and you continue to get good work through that. And that’s all you can do.

One of your regular gigs is teaching music at prisons. That strikes me as more of a passion project as opposed to a just-getting-the-bills-paid gig.

I teach at High Desert State Prison. It’s a level 4 prison, so you get all the gangbangers and murderers. They called me up a few years ago and said, “We need a guitar teacher to teach in the prison at night.” Originally, I said no, but then they talked me into it. And I love the job.

When I started, I thought, “There are so many people here who are so talented. What are they doing in jail?” And it’s not like they’re serving 60 days; these guys were lifers, or in there for 7-10 or 20 years. I get re-trained every year, and the instructors say, “Don’t get too familiar with them.” But you can’t help but be familiar with them. So you learn how not to get yourself in trouble.

It’s a pretty great job. The amazing thing about it is that they want you to be the teacher. Often, you’re the only authority figure they’ve ever known… outside of the police, of course. So they want you to run the class. But then [laughs] they want you to prove that you can play guitar, too! So you go out there, and they all say, “Well, play some Jimi Hendrix. Play some Santana,” And I do. And then they say, “Okay. You can teach us.”

What’s the most rewarding thing about teaching at High Desert?

I’ll give you one example. There was a guy who came to me, and his name was Luis Hernandez. He had never played guitar before, never wrote a song. In the time he spent with me, he learned how to play guitar, and he wrote some pretty clever songs. He wrote one called “Streets of Gold.” It’s about how people from Mexico view the United States; they think they’re going to come here, and their ship’s going to come in. And then they get up here and move in these neighborhoods with all the crime and things like that.

After he got released from prison, he was deported to Mexico. We communicate on Facebook, and he’s got a family, and he’s giving a good life. So, that’s pretty rewarding just to see that.

Beyond your teaching role at High Desert State Prison and your out-of-town gigs with Lacy J. Dalton, what’s next for you musically?

Doug Sandall and I are working on that CD. It’s just going to be guitar and harmonica; we’re just going with a bare-bones thing, because I want to book some songwriters festivals. That’s my business plan. I look at it like a business: “Okay, this is the investment I’m going to make,” and hopefully it’ll all come to fruition.