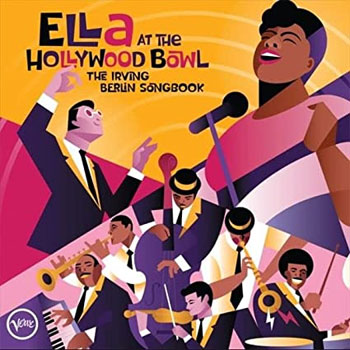 The pros far outweigh the cons on this thrilling set. First, the good news. According to the one-sheet (which I trust), until now there’s never been a live Songbook from Ella Fitzgerald. And this set of songs from classic American composer Irvin Berlin is filled with tunes both well-known (“I’ve Got My Love to Keep Me Warm”) and comparatively obscure (“Get Thee Behind Me Satan”).

This recording dates from August 16, 1958, shortly after Fitzgerald released her studio set Ella Fitzgerald Sings the Irving Berlin Songbook, so it’s a document of the diva onstage in support of that record. Recorded at the Hollywood Bowl in Los Angeles, it’s 15 essential tracks. This recording has resided in the private collection of Norman Granz until recently, unheard by the general public. It’s a must-listen for anyone who appreciates vocal jazz.

With those plaudits out of the way, here’s the bad news, and it’s not very bad at all. The sound quality is a bit on the flat/brittle side, sounding like a good-fidelity recording of a television performance. And beyond the participation of arranger-conductor Paul Weston, there’s no information available regarding the personnel on this date. See? Minor stuff indeed.

Beautifully packaged and featuring a superb liner note essay from Will Friedwald, Ella at the Hollywood Bowl is an outstanding release. I won’t be surprised to find it on many critics’ year-end best-of lists, and it’s likely to score some awards as well.