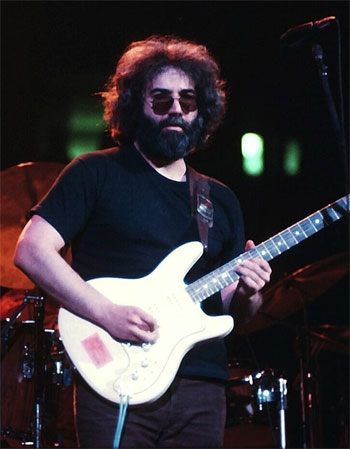 Photo by Carl Lender via Wikipedia

It’s remarkable to realize that at the time of his death on August 9, 1995, Jerry Garcia was only a few days past his 53rd birthday. The body of work to which he contributed, along with his importance in popular music history, suggests a life easily twice as long. Had he lived, Garcia would have celebrated his 80th birthday last month.

The legendary guitarist was for many the embodiment of the Grateful Dead’s musical and cultural aesthetic. Garcia launched the group – initially known as The Warlocks – in 1965 with fellow guitarist Bob Weir, bassist Phil Lesh, drummer Bill Kreutzmann and keyboardist Ron “Pigpen” McKernan. Other than the addition of second drummer Mickey Hart and a succession of keyboardists replacing McKernan, the group’s lineup would remain essentially intact for the Dead’s entire run.

Garcia’s trademark fluid guitar lines were a centerpiece of the Dead’s unique and complex sound, and his eclectic musical background – rooted in bluegrass and folk – informed the psychedelic group’s sonic character in fundamental ways. With Garcia at the helm, the Dead were a San Francisco institution, one that was instrumental in exposing the Bay Area’s music scene to the wider world.

Four days after Garcia’s death, an estimated 25,000 persons gathered in San Francisco’s Golden Gate Park for an emotional memorial. In testament to Garcia’s standing in the musical community, words of tribute poured in from across the cultural landscape.

Bob Dylan – who had toured in a co-billed series of dates with the Dead in 1987 – issued a statement that read in part: “To me he wasn’t only a musician and friend, he was more like a big brother who taught and showed me more than he’ll ever know. There are a lot of spaces and advances between the Carter family, Buddy Holly and, say, Ornette Coleman, a lot of universes, but he filled them all without being a member of any school. There’s no way to convey the loss.”

Fellow guitarist Carlos Santana lauded Garcia as “a profound talent, both as a musician and as an artist,” and expressed his belief that Garcia would take his place in the Great Beyond alongside “Bill Graham, Jimi Hendrix, Marvin Gaye, Miles Davis and other greats who have left us much too soon.”

While the Dead’s indelible legacy would endure, carried on in various ways by offshoots, side projects, tributes and other groups seeking to build upon the magical vibe of the band, the group would eventually cease operations in the wake of Garcia’s death.

But with a documented body of work that extends across the band’s official canon of released albums and films (plus an estimated 2000-plus live concert recordings) and the Grateful Dead’s deep and abiding influence on music – not to mention the guitarist’s solo and side-projects – the enduring legacy of Jerry Garcia within and beyond the Grateful Dead is sure to endure, providing inspiration for generations still to come.

Garcia played his last show with the Grateful Dead on July 9, exactly one month before his passing. Perhaps fittingly, the band’s last song of that gig at Soldier Field in Chicago was “Box of Rain,” a Robert Hunter/Phil Lesh song that concludes with the lyric, “Such a long, long time to be gone and a short time to be there.”