Album Review: Anthony “Big A” Sherrod and The Cornlickers – Right On Time 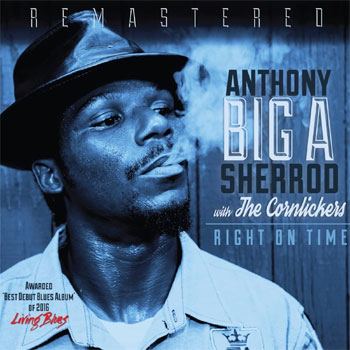 Anthony “Big A” Sherrod is a Clarksdale, Mississippi native and lives there to this very day; he teaches blues to young students at the Delta Blues Museum’s Blues & Education program. Gritty, powerful and heartfelt, his approach to the blues – backed by his band The Cornlickers – helps keep the juke joint tradition alive.

Notwithstanding live recordings made at Red’s Lounge in Clarksdale, Right On Time was the debut CD release from Sherrod and his band. Enthusiastically reviewed in Living Blues’ October 2016 issue, that album won LB’s Best Debut Blues Album in 2016, and would be included on Jim DeKoster’s list of the best blues albums of that decade.

Sherrod recently signed to Nola Blue Records and has plans for sessions for a new album. But in the meantime, Nola Blue is reissuing Right On Time. Remastered by fellow guitarist Bobby Gentilo (who produced the original sessions) the album sounds as impressive as ever.

That debut studio release has all of the fire of a live performance. The set opens with the rousing guitar workout “Rumblin’ Stumblin’.” “Find Me Another Woman” demonstrates the vitality of the shuffling I-IV-V blues structure; like a sturdy canvas, it provides a taut backdrop for Sherrod’s swaggering vocals and incendiary lead guitar work. The title track wastes no time in getting to the musical point: it opens with a brief Sherrod solo that sets the tone for the piece. Sherrod packs a lot of feeling into the notes, and he alternates effortlessly between spirited vocal phrases and stinging lead licks.

The best comes four tracks in. With its lumbering pace and simmering, sinister vibe, “Cold Feeling” provides Sherrod with plenty of space to stretch out. He demonstrates a keen sense of dynamics, letting notes hang in the air, initially peppering the arrangement with the sparest of fills. It’s more than two minutes in before he lets loose the solo, spitting out soulful, string-bending and stuttering riffs. But even then, he holds back, ratcheting up the tension to near the breaking point. Only as the song nears the five-minute mark does Sherrod relieve that tension by peeling off a solo that’s a model of subtlety and quiet confidence. As that solo unfolds, he showcases the many tone colors of which he is capable.

From there, it’s back to uptempo, swinging blues. Sherrod’s melodic sense is strong enough that he and the band can carry the music even without vocals. The instrumental “Shuffle in Big A” is a case in point: over the course of nearly seven minutes, Sherrod spins out a seemingly endless variety of lead guitar runs. With the support of Gentilo and the rock-solid rhythm section of bassist Tony Ryder and drummer Dale Wise, he’s unstoppable.

Sherrod blurs the lines between rock and blues (and serves up the best of both) with the slashing “Get Your Money.” “Tried and Tried” is a yearning, contemplative and smoky blues ballad. The loping “Train” is a nod to the deep history of the blues tradition. And Sherrod shows that there’s romance to be found in his playing, with the r&b-flavored slow and hypnotic blues of “Someday.” The set concludes with the jaunty, uptempo “Talk to Your Daughter,” bringing the album full circle, back to the structural simplicity of the opening track.

While Sherrod and his band ready their new record, time spent with the remastered Right on Time is time well spent indeed.