A Conversation with Kenny Neal

Acclaimed blues guitarist, singer and songwriter Kenny Neal has just released Straight from the Heart, his first release since moving to Ruf Records. The Blues Music Award winner (2019’s Contemporary Blues Male Artist of the Year) recorded the album in Baton Rouge with a band that includes family members Darnell Neal on bass and vocalist Syreeta Neal. The set’s hometown flavor comes through via a mix of styles, and features guest turns from Christone “Kingfish” Ingram, Tito Jackson and fellow Louisianians Rockin’ Dopsie Jr. and the Zydeco Twisters. 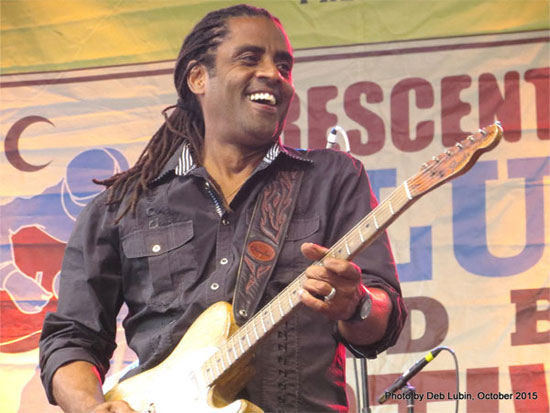 How does recording an album in Louisiana make it different?

By coming back home and having all my folks around me, I had a chance to think about what I remember the music being like as a kid growing up, and that’s why I called it Straight from The Heart. I wanted to really dig down deep and get the different styles of people like Fats Domino, Ernie K-Doe, my dad Raful Neal, Johnny Adams. And that’s what I did with this album. I didn’t feel pressured; I worked at my own pace. I experimented, played what I wanted to play. It was fun.

You’re known as a guitarist and blues harp player, but you did the horn arrangements on Straight from the Heart. What’s your background in horns?

I played trumpet in school. And the reason why I didn’t want to continue to play trumpet was because I thought I was a pretty boy and that the trumpet would mess my lips up! I didn’t want to destroy my looks, so I found another instrument to play. That’s the only thing I could read in music: treble clef for trumpet. I can’t read anything for my blues and my guitar work.

When did you start playing harp?

Oh, man… I can’t even remember! That was something that my dad always had lying around the house, because he was a harmonica player. The harp is like part of my hand. We still have them lying around today even at my own house. You know, when you grow up with something like that, you don’t really think much about it. It’s just something that’s natural to you. A lot of the guys over there in Lafayette, west of us from Baton Rouge, these guys grew up with the squeeze box all around; they all can play something. But they don’t call themselves an accordion player, you know? That’s the way it was for me with the harmonica.

Your lead guitar playing displays a skill at honoring the spaces between the notes. Does that come naturally?

I’m trying to get the melody and my feelings over to you. If you squeeze the string, squeeze it from the heart; feel what you’re doing. It’s not about how fast and how many notes I can play. That’s not what I’m trying to get across. And It’s good for me, because I can grow old and play like this, and I don’t have to worry about being an old man up there trying to play a zillion notes. [laughs] I’m looking at the bigger picture here!

The new album primarily features original songs, but you cover Albert King’s I’ll Play the Blues for You. What’s special about that song?

When I was coming up as a young kid, I would go into my grandpa’s juke joint down here called Spooner’s; that’s how I kept up with all the music. The jukebox man would come and put new records on the jukebox for my grandpa, and he’d put five song credits on the box for me. I loved “I’ll Play the Blues for You.” I used to play that and play that and play it, you know?

So, I wanted to capture that, but I combined it with a song that I wrote called Any Fool Will Do and I re-arranged it. I got the two rhythms combined together on that song. When I was recording, my little brother, Darnell the bass player, said, “It don’t really go like that.” He said, “Man, I’ve been playing this record for 30 years.” But I said, “Well, this is not the way it goes here. You’re going to have to relearn it today, brother!”

You dedicate Blues Keep Chasing Me to Lucky Peterson. What did knowing him and working with him mean to you?

Lucky was one of my favorite artists and also my best friend for all these years. I met him when I moved to Chicago in 1976 as a bass player with Buddy Guy and Junior Wells. I was playing with Muddy Waters and John Lee Hooker and all these guys, and he was with Johnny Taylor and Tyrone Davis and Bobby “Blue” Bland. Two young kids playing with these great guys, and we just became buddies. When I got my first record deal, I called him up. Every record I ever made, Lucky is on it.

He was successful with his career, but he always had problems, you know? He just couldn’t get over that hurdle; the drugs would get in the way. But this was the best guy, the sweetest person you ever would meet. Throughout more than half of my life, we’d been together so, when I got ready to make the album, I decided to write a song for him. It’s called Blues Keep Chasing Me, because every time he turned around, it was something that he couldn’t get away from.

I’m opening up my record label, Booga Music, and I’m doing gospel out of the studio here, Brookstown Recording in Baton Rouge. And the first album that I’m going to launch is the last Lucky Peterson/Kenny Neal session. In 2017, he came here and spent a week with me. We went into the studio, and we recorded 20 songs, just the two of us! Nobody else. It’s just me on harmonica and guitar, and him on keyboards and guitar. It was like sitting down and reminiscing.