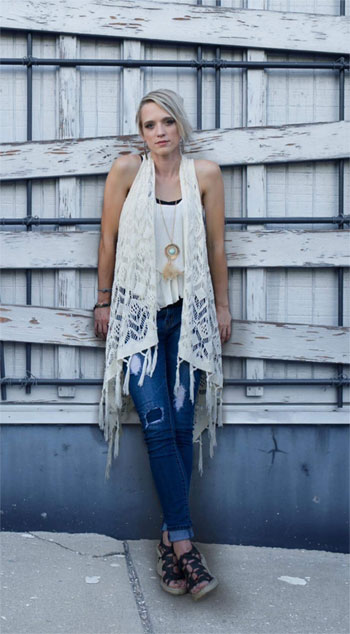 The last couple of years have been difficult for most everyone. As an unfortunate byproduct of measures taken to keep ourselves and others safe, the human need to communicate in person has been stifled. And as society gingerly moves toward and exit from this troubling era, the emotional debris becomes evident. Some artists have channeled the challenges they faced into music, one of the most effective means that creative humans to express themselves. Western North Carolina-based singer-songwriter Hope Griffin has done just that with her latest collection of songs, a five-song EP titled Before We Take Our Leave.

The title of Griffin’s latest release is drawn from the lyrics of “Lullaby,” the final song on the disc. “I like to title my releases with a line form one of the songs,” Griffin explains.” She chose the phrase because it reflects upon each of the EP’s five songs. “Each is a different version of leaving something behind,” she says. “Carousel,” for example is the story of the end of a marriage. “Lullaby” is the story of a quick fling. And Griffin says that “What You Didn’t Say” concerns itself with “the last thing you do before leaving town.”

Griffin stayed busy during the pandemic, performing whenever she could, but one thing she hasn’t done in quite awhile is release an album. “My last EP was a Christmas album in 2017,” she says, referring to And the Lights Will Shine, a collection of holiday classics plus one original tune.

“And I’ve changed a lot since then,” Griffin says. “Like everyone has, I’ve let some things go, and I’ve kept some pieces.” She describes Before We Take Our Leave as “a summation of all of those things that are still left in my suitcase.” Griffin characterizes her current musical persona as “Hope 2.0. It feels like I’ve been though a storm, and this is what has come out on the other side of it.”

Some of the new EP’s songs were written during the pandemic; others date from long before it. “I wrote ‘What You Didn’t Say’ years ago,” Griffin admits. Her original concept for the song back then was a simple guitar-and-voice arrangement. But the finished recording features multi-tracked vocal harmonies and lovely violin accompaniment as well.

And Before We Take Our Leave showcases Hope Griffin as an even stronger, more confident vocalist than before. Griffin agrees, noting that she was “fresh out of classical voice school” when she recorded “Fisherman’s Life” more than a decade ago. “Fast forward ten=plus years,” she says with a smile, “and I’ve found my own voice, my own style.”

Griffin’s stylistic range and versatility builds upon that formal training, adding in experience singing blues and ‘80s rock along with writing and performing her own material. On the occasions when she hears some of her early recordings, Griffin says that it’s “like looking at old pictures of yourself and thinking, ‘That’s girl’s about to go through some [stuff]!”

But even Hope Griffin’s earliest songs still resonate with her. That’s likely because they were written in a heartfelt and emotionally honest manner. She says then when one writes a song that way, “You’re capturing yourself in a time capsule; that’s how you were then.”

And Griffin works with a larger set of tools than before. While her first recordings are spare, the songs on Before We Take Our Leave variously employ cello or a full band. And the hypnotic and melancholy “Piece of the Pie” features a jazzy, soaring electric guitar solo.

Griffin says that the full-band approach happened naturally, thanks in part to requests form those who’ve seen her play live. At shows were she appears with her full band (featuring guitarist and frequent collaborator Eric Congdon), Griffin says that she has often been approached by people asking, “Do you have anything I can buy that sounds like [what we’ve just heard]?” As refined and subtle as Before We Take Our Leave is, the EP is also a musical answer to that question.

And while Griffin remains a solo artist, at the same time she’s a band leader, one who cultivates the creative talents of her fellow musicians. “When I was writing ‘Nothing to Do Tonight But You,’ I had a vision of who was playing what,” she says. “When we got to the studio, it was like, ‘This is where Jack [Mascari] plays, and this is where Eric plays.” But she left much of the details to her band mates. “That’s where they shine,” she says.