There’s a long and often proud tradition of family bands: The Jackson 5, The Osmonds and the Cowsills are among the most well-known among those. Now there’s a new – and decidedly more modern – addition to that musical heritage: Liliac. Launched in Santa Monica and now based in Georgia, the group features five siblings, all of whom play instruments and contribute to songwriting.

Like the aforementioned family acts, Liliac was put together by the band members’ father. Romanian-born Florin Cristea once had musical aspirations of his own, but he has since channeled those energies into musical careers for his five offspring. Liliac lead singer and middle-child Melody Cristea (age 20) says the idea for Liliac came first; musical lessons for her and her siblings – guitarist Samuel, 22; drummer Abigail, 21; bassist Ethan, 15; keyboardist Justin, 14 – came later. 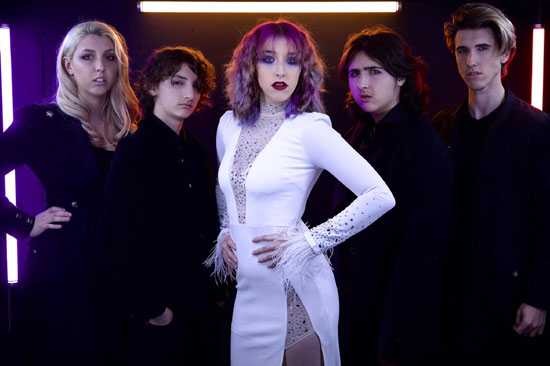 Early on, Melody says, “it was just me, Abby and Sam busking on the [3rd Street] Promenade in Santa Monica.” But once her two younger brothers entered their double-digit years, they wanted to get involved as well. “My dad was like, ‘Okay, might as well make a band with all of you guys,’” Melody recalls. Her father chose instruments for each of them. “Then we started taking lessons to learn the basics and move forward,” Melody says.

Florian Cristea’s own background is in the music of the Romanian Pentecostal Church, and in traditional Romanian folk. But once the family settled in California, he and his family developed a greater interest in hard rock. Melody mentions Queen, Aerosmith, Journey, Scorpions, Metallica and Megadeth as favorites, and notes that her greatest musical inspiration is the late Ronnie James Dio (of Black Sabbath, Rainbow and his own eponymous band).

These days, Melody is the band’s lead singer and primary focal point. But like her siblings, she’s an accomplished instrumentalist as well. She plays the flute, and in Liliac’s earliest days she was the group’s bassist. “Ethan used to be the rhythm guitarist,” Melody explains. “But later on in life, I decided I just wanted to be the front person and focus more on my voice.” So Melody taught her young brother how to play bass, while she moved out front to the mic.

Cynics might wonder if Liliac is merely a bunch of rich, privileged kids acting out their hobbies onstage. But that doesn’t seem to be the case: before relocating to Douglasville, a small city 30 minutes west of Atlanta, the family lived in a three-bedroom apartment. “The boys shared one room, the girls shared another, and my parents had their own room,” Melody says. The family’s new single-family house gives everyone their own personal space, and it even has a basement. “We’re going to put a [rehearsal] studio in there,” Melody says.

The group started out playing covers, with a focus on ‘70s and ‘80s hard rock. But the hard-working family band soon moved into writing its own material in a style inspired by their musical forebears. Released in 2020, Queen of Hearts features 13 original songs, all composed by the group. There’s a powerful, anthemic character to the songs, one that’s in line with the style of the band’s heroes. “I do the melody lines and write lyrics,” Melody says. “Sometimes I ask for help from my siblings, and they do help.” Each musician writes his or her own parts.

In addition to rehearsing, touring, writing and recording, the members of Liliac spend a lot of time on social media. “It’s very important to be active online,” Melody emphasizes, “so that people know that you are an active band that wants to connect with the people. You can share all your [music video clips], and they can keep watching and share.”

Asked if the band encounters groupies along the way, Melody says yes, but hastens to add that “they help us unpack, set up the stage, load up and stuff like that.” Though the band members’ tender years – not to mention dad Florian’s watchful eye – all but ensure that Liliac won’t be engaging in heavy metal “Riot House” styled debauchery, Liliac does encounter eyebrow-raising situations on tour. “This one fan was kind of weird,” Melody recalls. “He gave me a flip phone and said, ‘Can you hold on to this phone and keep in contact with me?’”

Liliac’s lead singer politely but firmly turned down the fan’s overture. But with a good-natured chuckle, she jokes about how she might have responded instead: “Could you at least upgrade to an iPhone 12?”