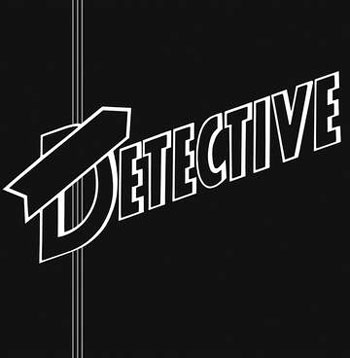 By the mid 1970s, having one’s own boutique record label was a symbol of Having Arrived. The Beatles started it all with Apple, and within a few years, The Moody Blues had Threshold, Deep Purple had (naturally) Purple Records, and The Rolling Stones had their own eponymous label. So it came as little surprise when Led Zeppelin’s manager Peter Grant launched Swan Song Records in 1974. Lasting nearly a decade, Swan Song was – like Apple had been – primarily the boutique label that would release records by its primary act. But the label did in fact put out nearly 20 albums by other artists. Bad Company was by far the most high-profile (and remunerative) of those, but another band, Detective, released a pair of fine records on the Swan Song imprint.

Fronted by powerful and charismatic vocalist Michael Des Barres – something of a rock and roll Zelig – Detective had an impressive enough pedigree. Des Barres had fronted Silverhead, a glam rock outfit who gained popularity in the UK as a concert supporting act. (Of course in later years he’d go on to greater fame with Chequered Past, Power Station and as an actor in film and television, often portraying – you guessed it – a rock star).

On keyboards was Tony Kaye, formerly of Yes (that’s him, not Rick Wakeman, on the brilliant The Yes Album). After leaving Yes, Kaye played with another former Yes-man, Peter Banks, in Flash, and with former Apple artist Jackie Lomax in Badger. And after Detective, he joined a late-period lineup of (former Apple artists) Badfinger.

In other words, Detective would figure – at least peripherally – into quite a few of those wonderfully knotty Peter Frame Rock Family Trees.

But back to Detective: the group was rounded out by skilled if lesser-known players: guitarist Michael Monarch, bassist Bobby Pickett (not the “Monster Mash” guy) and drummer Jon Hyde. They had the goods: they all played like mad, and most of the record’s nine cuts were written by Monarch plus one or more of his band mates.

The album opens with “Recognition,” a funky number with a soulful Des Barres lead vocal. Monarch’s tasty slide guitar and lots of layered “ooh” vocals date the song as a product of the ‘70s, but it’s a fine tune, and was chosen as the single.

Quite different – so different, in fact, that it sounds like the work of a different band – is “Got Enough Love.” Once the song gets a sustained intro out of the way, “Got Enough Love” becomes a dead ringer for Led Zeppelin. Monarch does a credible Jimmy Page, but Hyde replicates John Bonham’s thunderous, avoid-the-cymbals approach in simply uncanny fashion. Des Barres manages the feat of sounding a bit like Robert Plant while not losing his identity in the process. Only an uncredited saxophone break tips the unsuspecting listener that, hey, this isn’t Zep.

“Grim Reaper” is, if anything, even more Zep-like. But not Zep-lite: the song has a stuttering beat worthy of inclusion on Physical Graffiti or Presence. Backing vocals are reminiscent of Pink Floyd.

Up to this point, Detective has been all about the heaviness. But the band shifts gears in a big way for “Nightingale.” Thing is, the lovely acoustic guitar work is eerily, almost unnervingly reminiscent of what a listener would find if he or she dropped the needle on the second tune on Houses of the Holy. It’s a really good rewrite of the first part of “The Rain Song”, but by this point it’s reasonable to wonder what Peter Grant was thinking: did he want a second Led Zeppelin?

“Detective Man” sounds less like the band’s better-known labelmates, but it’s still very much in a compatible style. The record’s sole outside composition, “Ain’t None of Your Business” nonetheless fits seamlessly into the band’s musical context.

Oddly enough, the instrumental “Deep Down” is both the least Zeppish tune on the record and one of its best. Monarch’s soaring guitar style here bears little influence of Jimmy Page; instead, it sounds a bit like David Gilmour’s playing on his self-titled solo debut.

And then things get really funky. With a strutting, wailing lead Des Barres vocal, “Wild Hot Summer Nights” sounds like a musical summit of (here they are again) Led Zeppelin and Hot Chocolate. Or Average White Band. Or Mother’s Finest. You get the idea. It’s a blast, and – if independent promotion men had been on the case – could have scored on urban radio of the era. It’s that good.

But then – for better or worse – ”One More Heartache” opens with a drum intro that inevitably brings Bonzo to mind. Everything about the song – even Des Barres’ vocals this time – suggests that Detective was trying to make music that could pass for Led Zeppelin. The thing is, they pull it off, and not with inferior material, either.

Which makes Detective something of a head-scratcher. Yes, they could replicate every single one of Led Zeppelin’s sonic qualities. But they could churn out really groove-heavy songs like “Recognition” and “Wild Hot Summer Nights,” songs with a completely different character. So who were these guys when they were at home?

Within months of their debut, Detective returned with a follow-up, Takes One to Know One. While it lacked the funky character of some of the first record’s tunes – replacing them with a vintage rock’n’roll vibe – elsewhere it doubled down on the Zep-clone approach. “Warm Love” sounds a bit like Bad Company, so there’s that. And the following year, Swan Song released a promo-only LP, Live from the Atlantic Studios, featuring nearly all of the songs from the self-titled debut, only one from the second LP, and a cover of “Good Rockin’ Tonight.” Original vinyl copies are impossibly rare. And that was the final word from Detective.

If I did the “stars” rating thing, I’d consider docking Detective one star for its too-close-to-Zep character. But then I’d listen to the album once again, this time on its own merits, and award the platter the full five. Like I said, it’s that good. I might – maybe, I say – even give it an edge over Presence.

Limited to 2000 copies pressed on silver vinyl, a 2022 ORG Music release for Record Store Day brings Detective back into print for the first time in a decade-plus (and on vinyl for the first time since its original 1977 release).

But wait: something is amiss here. I don’t want to spoil the party, but this can’t be ignored. The Record Store Day promotional info for the new release mentions an “updated back cover,” and indeed it is updated. Four, not five men are in the photo; Tony Kaye is conspicuous in his absence. And Larry Jaffee’s liner notes – new for this reissue – mention Kaye a total of… hmm, let me count… zero times. Tony Kaye’s name is found nowhere within the package. Only if one looks closely at the pixelated background photo on the inner sleeve – where it’s covered in text – does one see the keyboardist. And there’s no explanation for all of this.