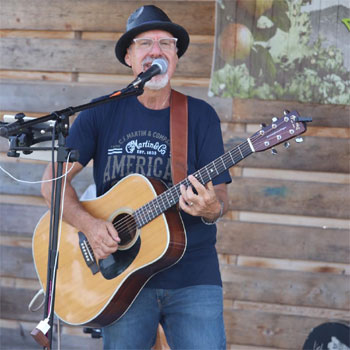 Guitarist, singer and songwriter plays both original songs and arrangements of rock, blues and country classics. After years living in Venice, California – where he split his time between playing music and working behind the camera on films like Steve Martin’s Father of the Bride II and the TV series Ally McBeal, Hyman related with his wife Laura to Etowah, N.C. to be closer to family. When he moved, Myron brought his experience with him, applying it to the music he makes in Western North Carolina.

You were involved in the live music scene in Los Angeles, playing famous venues like Madame Wong’s. Did you experience the pay-to-play phenomenon, in which performers played for “exposure,” paying the venue instead of the other way around?

That came right after me. I didn’t experience it, but I heard abut it. The venues hired us, but we didn’t really play for that< much money. I played a lot at Club 88, which became famous after< we played there. In addition to your work as a musician, when you lived in L.A. you worked extensively in the film industry. What lessons did you learn doing that that you’ve been able to apply as a performing musician?

The work ethic. Just like working in film, being a musician is a profession. Take it seriously, and get as good as you can at your craft.

You’ve put together solo arrangement of songs that were originally performed by groups. What are the advantages of playing solo?

Each song kind of tells me what it’s about; they’re all stories. The last song I wrote was about my dad, so I had to get my facts right on that one. Most of my songs are stories of what I’ve learned in life.

What’s your favorite thing about playing in front of an audience?

Just watching the faces, the smiles. I interact with the audience quite a bit, and sometimes I want them to help sing along. There are so many songs from my era that people relate to. They tell me, “I know that song! It brings back so many memories.” When people come and listen to me play, they get involved by singing some backup with me or dancing. And they’re not worrying about anything else except focusing on that, right there and then.

You have an extensive repertoire. But is there one song in particular that seems to go over especially well with audiences?

It all depends on where I’m playing. A lot of people love Led Zeppelin. And a lot of people like Jimmy Buffett’s “Margarativille”: they love singing, “Salt! Salt! Salt!” There are so many great songs.

I play at a lot of places that have “regulars.” And people are always asking me to play certain songs. If I don’t know a song, when I go home I’ll figure it out, [transpose] it into the key I want it, and then come back and play it next time. It’s great watching the smiles on their faces after I do that.