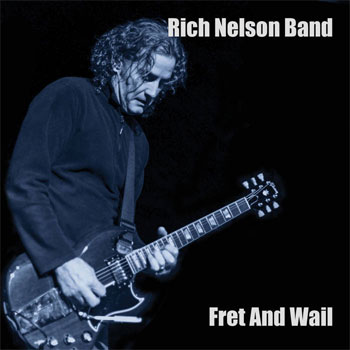 One’s place of birth can exert a significant influence upon an individual. Even, it seems, if one didn’t live there for very long. To wit: People often peg me as a New Yorker, though I neither have the accent (‘least I don’t think I do) nor have I lived there since before my fourth birthday.

Today Rich Nelson lives in Western North Carolina, though he’s a native of Detroit, and he lived there for many years. And the Motor City spirit comes through on his original music. Nelson’s their long player, Fret and Wail, continues on with the high quality musicianship and songwriting that characterized his previous releases.

The pandemic put the brakes on live performance in 2020, but Nelson continued work on his third album, releasing it late last year. His aesthetic is equal parts breezy melodies, strong vocals and rock ‘n’ roll muscle. The songs open with strong hooks and then develop/unfold as the go along. Nelson often adopts a first-person point of view for his lyrics, and his songs explore a wide array of emotions and ideas.

There’s a timeless character to these songs; working in a mainstream melodic rock context, there’s little about the songs on Fret and Wail that identify them as 21st century songs. Nelson’s arranging approach steers clear of trendy flourishes; the result is an album that isn’t likely to feel “dated” five years from now.

Subtle touches of other styles (even reggae) work their way into songs like “Walking in Circles,” but the music is firmly planted in the tuneful rock category. And the character of the tunes is nicely varied: “One More Picture Show” is a melancholy mid-tempo tune with soaring vocal harmonies, while “After All” is a heartland rocker. Tasty blues licks inform “After All.”

Nelson cranks up the distortion for “Detroit City Way,” an arena rocker worthy of its name. “Imagination keep the energy going with an even better melody and more stacked vocals. A hypnotic signature guitar melody is at the center of “When,” an epic tune that may remind some listeners of prime-era Neil Young and Crazy Horse. The evocative, cinematic track is the strongest among Fret and Wail’s dozen tracks. A slow burn, the track finds Nelson waiting four-plus minutes to start singing; the track runs more than eight minutes, and none of that time is wasted.

Piano takes center stage – joined by some fretless bass – on “I’m Never Going to Let You Down Again.” The song is different from most everything else on the album, but its strong pop values – hints of Imagine-era John Lennon – make it a winner. The powerful yet understated “It’s Been So Long” has a weary yet optimistic feel. “One Step at a Time” demonstrates that there’s still life left in the power ballad idiom. And the album closes on a contemplative note with the moody “Hands of Time.”

As a showcase of Rich Nelson’s Detroit-bred songwriting talents, Fret and Wail would seem to present the best of what’s he’s been up to lately. But word is that mere months after the release of his third album, a fourth is already in progress.