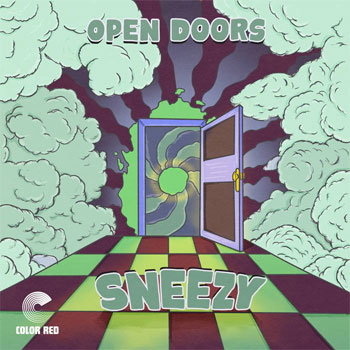 A funk/jam band based in Chicago, Sneezy has released Open Doors as its third album. Don’t be put off by the jam label; while elements of that noodlesome, unfocused style may be part of the Sneezy mix, this 14-track studio release is a collection of compact, tightly-focused tunes. Belying the jam tag, only one of the tracks runs past the four-minute mark, and then only barely.

There’s a loose, friendly vibe to the music, with tasty instrumental work and exuberant massed vocals. Sneezy seamlessly folds in elements of hip hop, Steely Dan-style arrangement and an overall character that reminds me of Doobie Brothers crossed with Average White Band, Wet Willie and a bit of Arrested Development.

A cut like “Not Sorry” shows a reggae influence; “Skip” sounds more like Toto, albeit with some (grrrr) AutoTune vocal treatments. Sneezy seems to want to have it both ways: aiming to appeal both to a jam crowd as well to the kind of people who actually like the music coming out of their gym’s loudspeakers. That’s an ambitious goal – and one that risks falling short of pleasing either camp – but the band is to be commended for reaching high. It’s beyond dispute that fans of one style or the other will find at least parts of Open Doors to their liking.