Volbeat Continues to Build its Fan Base by Defying Expectations

This feature appeared previously in Rock On magazine.

For 20 years and running, Copenhagen, Denmark-based band Volbeat has had it both ways: the popular group has honed its brand of hard-rock (with elements of early, vintage rock ‘n’ roll) while appealing to an audience that extends well beyond rock fans. Few groups have been as successful at maintaining their musical integrity while continuing to grow their fan base decades into their careers. Volbeat kicks off its 2022 North American tour with a January 25 concert at the Reno Events Center, co-headlining with fellow European hard rockers Ghost.

Formed in 2001 by Michael Poulsen, Volbeat was conceived as a way for the guitarist-singer to pursue a style more creatively rewarding than the death metal he had been playing with his previous group. He enlisted the talents of other like-minded musicians including drummer Jon Larsen. While carrying on with the power and energy of the music its members had made previously, Volbeat would also draw inspiration from more classic and timeless sources like blues, rockabilly and soul. 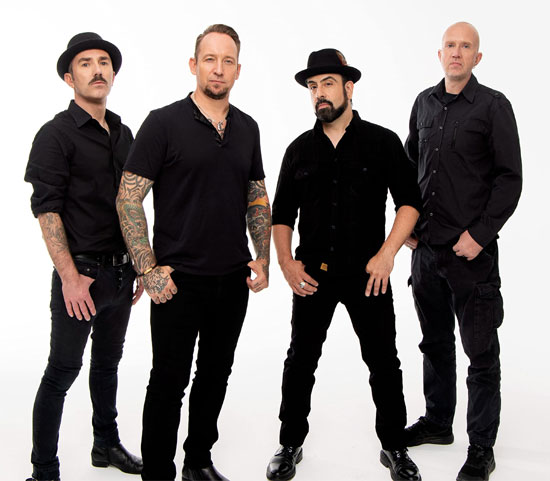 Larsen says that Volbeat’s musical approach is a natural one for its members. “Michael grew up [listening to] all the great artists of the ‘50s: Elvis, Chuck Berry, Little Richard, Jerry Lee Lewis.” Larsen’s own formative years centered around the music of the following decade; he mentions four British bands – the Beatles, the Rolling Stones, the Who and the Kinks – as early inspirations.

From Volbeat’s earliest days, the four-piece band focused on original material that conveyed the energy of modern-day hard rock and metal, but remained true to the spirit of early rock ‘n’ roll. But Larsen emphasizes that the group’s mindset wasn’t some kind of studied, clinical exercise in music-making. “We don’t say, ‘Oh, we’ve got to do a ‘50s-type of rock ‘n’ roll song.’ It just happens, you know?” he says.

And Volbeat’s inimitable style quickly won the attention of fans in their native Denmark. The group landed a record deal on the strength of their demo tape, and their major-label debut, 2005’s The Strength/The Sound/The Songs sold well, going Double-platinum in Denmark and Gold in Germany. The record was named Best Album of 2005 by the Danish Metal Musik Awards.

Even though everyone in the group was a seasoned musician, Volbeat couldn’t coast on the reputation of its members. The band had to pay its dues, “playing in ‘toilets,’” Larsen says with a chuckle. But he says that Volbeat’s bookings quickly progressed from small clubs to bigger clubs, and then to larger and larger concert venues. “There’s a bit of luck in it,” he admits. “But we’ve worked really, really hard.”

Volbeat’s success has grown steadily. The group became a popular fixture on the European festival circuit, and by 2009 Volbeat was a featured act at some of the continent’s biggest outdoor festivals. Soon Volbeat was sharing stages with the biggest names in metal, including Anthrax, Megadeth, Metallica and Slayer.

Conquering America was next. Larsen credits the band’s emphasis upon touring in the States as a key factor in building a fan base here. Volbeat landed in the U.S. in May 2009, supporting Nightwish on a tour of the East Coast. But what followed was even bigger. “There’s no denying it,” Larsen says. “Being on tour with Metallica helped. We went east, we went west, and we had shows in the middle as well. They are the biggest metal band of all time; wherever they go, it’s a sold out show.”

Opening acts sometimes get less love from audiences who have paid to see the headliner. But Volbeat won over those Metallica fans. And they didn’t take the new audience for granted. “As soon as we could, we came back to a lot of those cities,” Larsen notes. “We played in clubs, and we kept on touring. We did it the good old fashioned way.” The touring paid off in other ways, too: Volbeat’s increased Stateside profile helped push several of the group’s songs to the #1 spot on Sirius XM.

Former Anthrax guitarist Rob Caggiano started working with Volbeat as a producer during sessions in late 2012 and 2013. Caggiano had also planned to serve as “guest guitarist” on the sessions, adding some searing solos. But the experience went so well for all concerned that by the time the resulting album (2013’s Outlaw Gentlemen and Shady Ladies) was released, Caggiano had joined the band as a full-time member.

Larsen says that the addition of Caggiano “opened a door” for Volbeat. The group’s original concept more or less prohibited guitar solos, a trademark of metal bands that didn’t figure prominently in early rock ‘n’ roll. “We started out by saying, ‘No guitar solos at all,’’ he explains, “because most guitar solos are kind of boring!”

But after four or five albums, Volbeat was ready to relax that restriction. “It was like, ‘Okay, maybe we should have a guitar solo here and there,’” Larsen recalls with a laugh. “And Rob’s guitar style has really added to the band.”

A more recent addition is bassist Kaspar Boye Larsen (no relation to Volbeat’s drummer), who joined in 2016 and was first heard on record with the band on 2019’s Rewind, Replay, Rebound. With a background in both punk and metal – and previous experience as Volbeat’s touring bassist more than a decade ago – Kaspar colors the group’s sound in a new way as well. “Sometimes he plays with his fingers and not a pick,” says Jon Larsen. And as opposed to following the basic chordal structure of a song, Volbeat’s bassist comes up with other ideas that contrast and complement Caggiano’s guitar work.

Volbeat had a major tour scheduled for 2020. But when the global pandemic scotched those plans, the band wasn’t content to sit still. Larsen recalls the band’s thinking: “We can’t just sit at home with our feet in front of the fire! We have to keep working.” So they made another album. Released in December, Servant of the Mind is Volbeat’s eighth studio release, and the second with the current lineup.

Servant of the Mind is consistent in serving up the kind of rock the band’s fans have come to love, but at the same time it’s possibly the most stylistically varied album in the group’s catalog. One of many standout tracks is “Dagen Før,” a song featuring guest vocals from Stine Bramsen, former lead singer of massively popular Danish pop group Alphabeat.

When Michael came up with the basic track for the song, he said, ‘I hear a female voice on this,’” Larsen recalls. They asked Bramsen; she agreed, coming to the studio and knocking out her superb vocal parts in less than three hours. In a sense, it’s a testament to Volbeat’s reputation that the band can feature a pop singer without raising the ire of hard rock fans.

Larsen dismisses the idea that having Bramsen guest on a Volbeat record is especially unusual. He suggests that his band has always defied expectations. “Back in the days when we had Barney [Greenway] from Napalm Death on a track, there were probably people wondering, ‘What are they doing?’” he says. “By now, I guess they’re kind of used to it!”