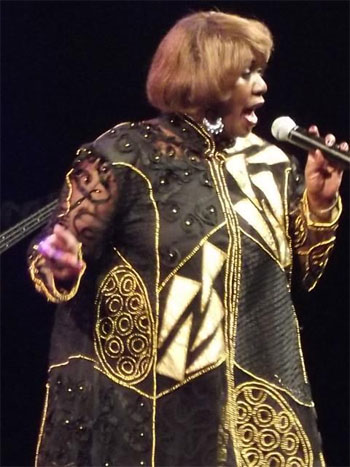 Her father went on to tell her how he first learned of her participation in The Human Tornado. “His band members were watching it, and he heard them laughing and howling,” Shirley says. “He came off the back of the bus: ‘What’s going on out here? What y’all laughing about?’” Once he saw the action onscreen, he sat down and watched along with the other musicians. “After that,” Shirley says with a laugh, “Every time I looked around, my dad was like, ‘I done lost that movie. Could you give me another copy?’”

King says that it was a joy to have taken part in something that gave her father such pleasure. And he would kid her that she had achieved something he had not. “He would say, ‘Well, I haven’t been on a motion movie!’” Shirley says. And right after that, they put him in the Blues Brothers movies two different times.”

By the end of the ‘80s King felt pressure from her church, so she stopped dancing and took a job selling scriptures on cassette tapes to make ends meet. She recalls a conversation with her father. “He had given me some money, and he said, ‘Honey, how’s your Bible tape selling going on? How’s that business?’ And I just looked at him with one of them little pitiful looks and told him: ‘It’s not working, Daddy. Not one person in the church bought a talking Bible tape. Not one!’”

So in addition to the money, B.B. King gave his daughter some advice. “Honey, if you’re in church, and they’re telling you not to do what you do best that’s making you some money, then you’re not in the right place. As an entertainer, you do what you have to do to make money. That don’t make you a bad person. I believe in God, but I’m doing what it takes to take care of you guys.”

Hearing those words, Shirley King made a decision. “I realized, ‘I don’t want to get a day job,’” she says. “Because that would have been what I would have to do next. I said, ‘Since I’m already in the business, I’m going to go and check the blues now.’” So she began paying attention to the Chicago blues scene, hoping to break in as a singer. “I started going around watching all the blues artists, including Koko Taylor,” she says.

Most of the entertainers she met knew that she was B.B. King’s daughter, but that didn’t get her far. “Nobody would let me sit in,” she says. “They knew I was a dancer, but that didn’t mean I was supposed to be a singer. So I stopped begging, because that’s what they started telling me: ‘You got to wait your turn. There’s other people in line that was here before you.’”

It was three-time Grammy Award nominee Billy Branch who offered King her first real encouragement with regard to her goal of becoming a blues singer. “You got the greatest blues father in the world. You need to be out here trying to sing some blues,” King recalls him telling her. “And I was thinking to myself, ‘Billy, I’m trying to do that. But won’t nobody let me on the stage!’ So Billy started letting me come to all his shows and sit in with him.”

Eventually, King worked up the courage to ask to be let onstage at Chicago’s famed blues club Kingston Mines. But she wasn’t as prepared for the opportunity as she could have been. “The young lady called me to sit in,” she recalls. “This place was so crowded you couldn’t even see up there; both sides was crowded. I was so excited, I forgot I didn’t know no blues songs! I would want to do ‘Got My Mojo Workin’ but I didn’t know the words to it, so all I could sing was ‘Got My Mojo Workin’.”

So on the spur of the moment, King decided to draw upon her previous performing experience. “I saw the owner at the front table,” she says. “He was sitting right there staring at me. I just stopped singing and started doing the shake dance on his stage. And he was looking at me all strange. I ran over there and pushed the table away, jumped in his lap and just started shaking in his seat!” King says that the crowd went wild. “Everybody in that place went to clapping, and they gave me a standing ovation. Because I put on a show that night.”

Perhaps improbably, King’s spontaneous performance would earn her a regular gig at Kingston Mines. “In three weeks to a month, I was working there,” she says. “I didn’t have no car, so I would get on the bus every night and ride all the way from the south side to Kingston Mines.” She admits that she still didn’t know many blues songs, but she was learning as she went along. “I would go in there every night and sing, leave with no voice, get on the bus and ride back to the south side. And I kept doing that. And after a while I started learning songs. And she made dancing part of her act, because the audiences responded well when she did.

“I was really flashy when I started singing the blues,” King says. “I had just left off the circuit dancing, so I still had the ‘boom bam’ body. Once you see something work, you do that,” she explains. “I started telling people, ‘When you go and see B.B. King, you gonna see B.B. play Lucille. And when you come to see Shirley King, you gonna see somebody that knows how to shake a mean hip!’ And that just got me over all over the world. Any place I go, people was always bragging about my showmanship. Sometimes they wouldn’t even talk about my singing! It was always ‘the amazing entertainer.’ Always.”

Though her answer begins with a sigh and “here we go with this question,” King is willing to discuss what it was like growing up with B.B. King for a father. “My daddy was never home,” she says. “He was famous when I was born, and he was touring like crazy when I was growing up. But he always spent time with me to the point of letting me know, ‘I love you, But I really got to do this. Because later on in life, it will benefit you.’”