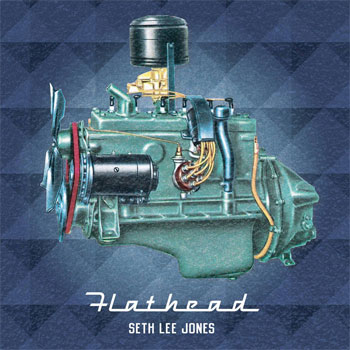 Seth Lee Jones aims for a live-in-the-studio vibe on Flathead, and the Tulsa guitarist hits the bullseye. Leading a trio that features bassist Bo Hallford and drummer Matt Teegarden, Jones tears through nine tracks – mostly blues classics – and captures the sound and spirit of live performance, coupled with the sonic clarity of a studio session.

Jones’ vocal quality is characterized by a soulful growl, and that gives the music a seething, slightly dangerous air. Backed by a rock-solid (if deliberately unflashy) rhythm section, Jones leans into his guitar work, presenting a style that combines lead and rhythm parts. That approach to the guitar keeps things lean and mean, so when the lead licks present themselves, they fit into the overall sound, taking on the role of sparring partner with Jones’ voice.

The hypnotic signature lick at the core of “Driving Wheel” is a nod to Jimi Hendrix’s Band of Gypsys-era number, “Changes.” And Jones’ fretboard fireworks split the difference between Hendrix’s style and something closer to Billy F Gibbons’ work with ZZ Top.

But Flathead isn’t all high-powered blues-rock. The plodding, sinister vibe of “It Was Rainin’” provides a musical canvas upon which Jones splashes subtle slide work. The trio feels like it’s holding back through the vocal verses, and even when Jones takes a solo, he exercises restraint. The trio’s approach here seems like a buildup to a frenzied release that never comes, though.

Multi-tracked guitars on “Moving Me (Way Too Fast)” traffics in standard blues changes, but Hallford’s bass thunders in a way it hadn’t on the cuts that came before. And the band takes an uptempo approach to the lead guitar workout “Desiree.” Jones’ guitar lines alternate between following his vocal melody in lockstep, then diverging from it in call-and-response fashion.

The loping “You Gonna Wreck My Life” starts out with Hallford’s bass in tight synchronization with Jones’ cyclical guitar parts, establishing a musical mantra. Then, when Jones cuts into searing slide work, Hallford holds down the bottom. Where “It Was Rainin’” finds the trio perhaps holding back a bit too much, here Jones is a man unleashed.

Save for a quick accent here and there, drummer Teegarden rarely breaks out from his simple, unadorned approach to the back beat. His timing is precise and assured, so it stands to reason that his meant-and-potatoes approach is by design, not limitation: it certainly serves to keep the focus on Seth Jones’ voice and guitar.

Jones’ reading of “Tulsa Time” – a song popularized twice in 1978, once by country star Don Williams and almost simultaneously by Eric Clapton – mines the blues feel within the tune. And the sexy shuffle of “Mary Ann” showcases the best playing – by all three musicians – on the entire set. The arrangement unexpectedly switches gears, making it the most interesting cut on the record as well. The trio’s skill at changing things up is surely a highlight of their live shows. And at its core, that vibe is what Flathead aims to capture and communicate.