Home  »  interview • rawk   »   Flights Are Back on Schedule for Travers Brothership

Flights Are Back on Schedule for Travers Brothership

Brothers Kyle and Eric Travers launched their band, Travers Brothership, nearly a decade ago in Black Mountain. After a few years of honing their approach, they recorded and released their debut album, A Way to Survive, in 2016. That same year the rock/jam/blues band won the title of “#1 Alternative Band in WNC” in the annual Mountain Xpress poll. Extensive touring quickly became a way of life for the band until the pandemic put a temporary stop to live music in 2020. But now Travers Brothership is back, playing dates in and around the region. 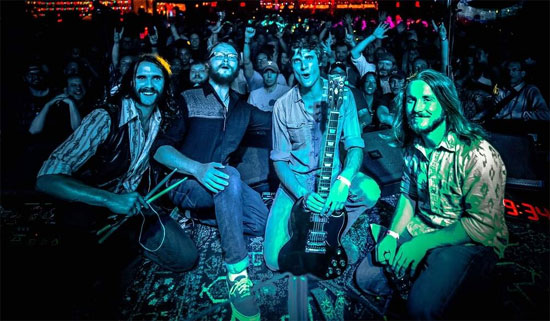 What did you and the other members of the band do during the period when you weren’t playing shows?
Kyle Travers: Personally, the time off was refreshing for me; it really helped me clear my mind and ground myself after a chaotic seven years of constant touring the U.S. and Europe. Our keyboardist Ian and I bought motorcycles and rode 5,000-plus miles in the Blue Ridge Mountains. Motorcycling is now one of my favorite pastimes.

Have you found that the events of the last year-plus had any effect upon your creativity?
I have indeed! Some of the band practiced constantly and started up some side projects, but I took almost the entire year off of playing. I only picked up the guitar a handful of times. I have played and wrote tunes constantly for the last 21 years, and a break was much needed. Now when I pick up the guitar I feel refreshed creatively and inspired again. Creatively, the shutdown helped me find a new voice.

You recently played FloydFest. What was it like playing a festival gig after the long break?
It felt like just going back to work and clocking in for me. Our band has always felt comfortable on big stages, and it was a joy to be back at Floyd playing an evening set in front of thousands of fans again. It was great to catch up with old pals and make music with them again. I have a newfound appreciation for being able to perform gatherings of that size now.

You’ve done some shows with your dad, “Hurricane” Bob Travers; he’s a regional legend. Were those one-offs, or is that something that you’d like to make a regular or recurring feature of your performances?
Being able to play live with my father is one of the greatest joys of my life. He got me into playing music and taught me a lot early on, so when we play together it’s easy and fun. Our call-and-response moments on guitar are some of the best I’ve ever had with any guitar player. He makes it to the gigs he can and sits in with us, but one day it would be cool to have him open up for Travers Brothership for an entire tour.

What’s up as far as new music, new recordings etc.?
We released a live album called Road Worn Shoes earlier this year; I think it’s our best work yet by far. The double vinyl for that album comes out later this summer. And we plan on heading back into the studio this winter to begin work on our next release.