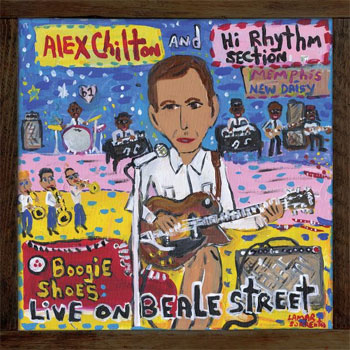 If there’s such a thing as an obscure legend, Alex Chilton is one. While he was in fact the lead singer in a popular ‘60s pop group (Box Tops) and part of supremely influential Memphis band Big Star, his name isn’t one that’s familiar to the casual music listener. And even among those who appreciate his superb solo work, Chilton – who passed away in 2010 – exemplifies the phrase “erratic artist.” Ira Robbins’ indispensable Trouser Press said it most succinctly (if perhaps a tad unkindly) in a review: “At his worst, he sounds like someone’s holding a checkbook on him; few reputable performers can sound as distracted or uninterested in a studio performance”).

But Chilton seemed most at ease, most at home and most engaged when he was playing the music that he loved. Not his music, you must understand; his fascination with obscure covers is as legendary as his difficult nature.

I bring all of this up to make the point that unlike some of his studio work, Chilton’s live performances are more likely to impress. And unlike the sloppy (if enjoyable) Live in London from 1981, a newly-released set, Boogie Shoes: Live on Beale Street showcases Alex Chilton at his best.

Backed by the Hi Rhythm Section(!), Chilton tears into a set of classic soul sides, and he’s never sounded better. There was no rehearsal for this set, and it’s clear none was needed. Chilton was rarely as “on” as he was this night in 1999 in Memphis. A fundraiser to defray medical expenses for revered Memphis music figure Fred Ford, the show is tight and focused, yet full of the loose-limbed energy and charm that represented Alex Chilton at his very best. Even when delivering familiar standards like “Lucille,” “Kansas City” and “Where Did Our Love Go,” Chilton is on target.

The evening’s set was professionally recorded with all of the quality one would expect from a studio date, and thanks in no small part to the Hi guys, the arrangements are robust without being overblown, organized without being stiff. Though it was never intended for release, Boogie Shoes may well end up serving as the definitive musical statement of Alex Chilton’s solo career.