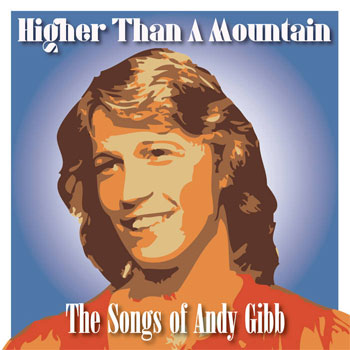 It can’t have been easy being Andy Gibb. It would be challenging enough to have a famous older sibling scoring hit after hit and then trying to have a music career of your own. But Andy had three older brothers doing it. Not only could Barry, Robin and Maurice sing, but they could write.

Andy never fully escaped from the shadow the Bee Gees cast over his career, but he made some solid pop albums. Three, in fact, with more than a bit of help (from Barry in particular, who co-wrote many songs).

The idea of an album in tribute to Andy Gibb might not occur to most. But it did occur to Andrew Curry, who has masterminded similar projects in honor of many other artists. It will go without saying to anyone familiar with Andy’s work that the material explored on this 15-song various artists set is firmly in soft-pop territory. But it’s winning soft-pop.

And while Pop 4’s reading of “(Love is) Thicker Than Water” takes a stylistic perspective not unlike the original, other bands are a bit more adventurous. The Corner Laughers’ “Shadow Dancing” is sterling, displaying just a scintilla of danger. Unexpected, that. And sparkle*jets u.k. make “I Can’t Help It” sound like a James Bond theme.

Lisa Mychols’ “(Our Love) Don’t Throw it All Away” has a lovely feel and arrangement. Coke Belda made his Gibb-fandom known long ago, and his cover of “Me (Without You)” is lovely. Unicórnios Impressionantes apply a Sergio Mendes feel to “After Dark.”

Some songs work better than others, and some performances doesn’t quite scale the heights of pop effervescence. But when the artists reach a bit, the effort often pays dividends. So it is with the Armoires’ “Words and Music,” cast here in an arrangement that strongly evokes thoughts of Sixpence None the Richer’s “Kiss Me.” It’s easily the best track on the album.

But David Brookings gives that track a run for its money with his cover of “An Everlasting Love.” The stiff drums sound like band-in-a-box but the guitar jangle and multitracked vocals offset that minor weakness. Irene Peña’s “Wherever You Are” is another highlight; here’s hoping she surfaces with a full-length album of her own, sharpish.

“On “Why,” the Test Pressings (featuring Robbie Rist) rock up Andy Gibb’s music with surprisingly impressive results. Jason Berk threatens to do nearly as well with “Flowing Rivers,” but his drums sound suspiciously like samples played on a keyboard, and the song suffers from that. His tasty guitar textures go a long way toward redeeming matters, though. How one feels about falsetto vocals will determine one’s potential for enjoying Ken Sharp and Fernando Perdomo’s reading of “One More Look at the Night.”

Few of the songs here – written by Andy Gibb, Barry or both – rank among the most immortal works in the pop music canon. Barry saved those for his group. But they’re not throwaways, either. Mostly, they’re pretty-good or better pop songs. And grading on the curve that doesn’t judge the source material, Higher Than a Mountain is good, sometimes very good and occasionally brilliant.