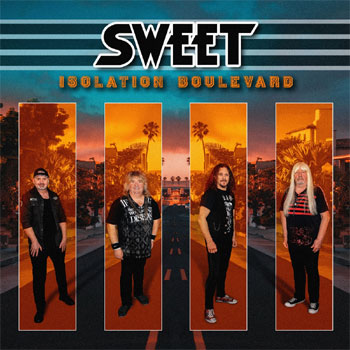 Artists often have very good reasons for re-recording their hit songs. The vagaries of the music industry are such that artists – even ones who wrote their own material – end up not owning the recordings. So when the music gets sold to consumers – or when it’s licensed by music directors for use in film and television – the profits don’t redound to the artist.

The solution is to cut new versions of the songs – often following the arrangement and production cues as closely as possible – to create soundalike versions of the tunes. Sometimes it’s done with dreadful results: consumers have to be wary if they purchase an album purporting to contain Badfinger’s music, for example. Other times it’s just okay: Little Richard was one of many ‘50s era recording artists who re-cut his classic sides for labels other than Specialty: stick with the originals. And sometimes, though rarely, it’s good.

With the global disruption that was 2020 (and part of ‘21) opportunities to get the old band together and record were somewhat limited. But of course remote/isolated recording has been an established practice for some years now. At best, the results don’t even telegraph the fact that the musicians weren’t in a room together.

And that’s what Sweet did. You’ll recall Sweet, the band that gave us some of the best examples of what I like to call bubbleglam: “Fox on the Run,” “Little Willy,” “Ballroom Blitz,” and an immortal slab of bubbleprog, “”Love is Like Oxygen.” The band’s high water mark was their album Desolation Boulevard, containing more than its share of classics.

Which brings us to 2021. With a title that’s either clever or obvious – I can’t decide – they’ve released Isolation Boulevard, a greatest-hits collection featuring new versions of a dozen of the band’s top tunes.

Formed in 1968, the classic-era band began to splinter in 1978, packing it in by 1981. Original lead vocalist Brian Connolly died in 1997. Guitarist Andy Scott joined in 1970 two years before the band’s debut LP and early enough for him to count as a de facto founding member. He launched Andy Scott’s Sweet in 1985 and has kept it going ever since.

Good thing, that: The other three classic-era musicians have all passed on, with Steve Priest dying in 2020. Priest led a Sweet of his own; with him gone, sole survivor Scott is back to calling his group Sweet. Lead vocalist Paul Manzi doesn’t sound at all like Connolly, though. Sammy Hagar, more like.

And the band does a staggeringly good job at creating soundalike recordings of their hits. Clearly they spent a great deal of care in getting little details – like the analog synthesizer lines of “Fox on the Run” – just right. And Scott is an underrated guitarist, so even though he’s aping a version of him that existed 40 years ago, it’s nonetheless impressive to hear him execute those quick licks and glissandi on the chorus of “Action.”

If there’s a disappointment to this set, it’s that the remake of “Love is Like Oxygen” leaves out the atmospheric middle bit, the section in which Sweet managed to sound like 10cc, Supertramp and Alan Parsons Project all in one. But the band is in fine from throughout. And even though Manzi won’t ever be mistaken for Connolly, Scott’s helium vocal parts – a key ingredient in the signature Sweet sound – are all over the album.

Measured strictly on its own merits, this is a fine album of great songs. But it’s fair to wonder: Does Isolation Boulevard actually need to exist? If you’re Andy Scott, quite possibly yes. If you’re a fan who owns the original versions (or who has access to them via Spotify or whatever) then the answer is a bit more in question.