The Get Right Band: Taking a Left Turn at Number Four

Over the last seven years, Asheville-based psychedelic indie rock trio The Get Right Band sharpened their skills as writers and musicians; each album represented a step forward in their effective use of the recording studio. But for the group’s fourth and latest, Itchy Soul, the band members – bassist Jesse Gentry, drummer Jian-Claude Mears and guitarist Silas Durocher – threw much of what they learned out the window, making an album at home. 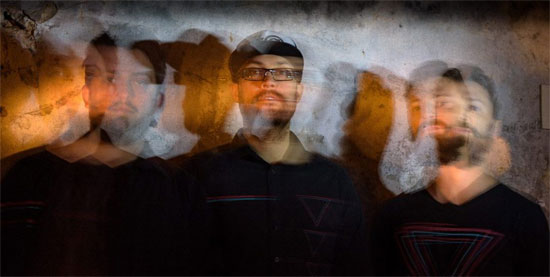 After very positive experiences making your albums in recording studios, why did you take a different approach to create Itchy Soul?

We made our last studio record at Echo Mountain Recording with Julian Dreyer, and we were really happy with how it came out. And I was sort of assuming that next time around, we would just repeat that process. But JC had the idea to switch things up, just for the sake of throwing a wrench in the normal order of operations. We started talking about the idea of doing something different, treating the recording like its own art form, with no [relation] to live show. That approach also let us take more time and experiment more.

How do you thinkItchy Soul differs from the band’s past albums as a result of its different method of creation?

This time we found ourselves drawn to things one might consider more “poppy” or commercial. But because we’re hypersensitive about not doing anything that feels cheesy or inauthentic, things became more psychedelic and weird. So to my ears, this record has come out both poppierand weirder than any of our previous albums. And that was the goal, too.

Compared to the band’s previous work, the new album features a greater emphasis on topical lyrics. What led to that?

I’m at a time in my personal life when I’m more aware of world and political news than ever before, and it’s had a contradictory impact on me. On one hand, I feel we’re in pretty dark times, and I’m not even talking about coronavirus. The world is war-torn, poverty-torn and disaster-torn. So some songs – like “Wired,” “Itchy Soul” and “Pulled Up Root” – are sort of about a sense of agitation and distress. And simultaneously, that heightened awareness makes me that much more grateful for how good my life is, having a home food, health and loved ones. So both of those things are showing up more in my lyrics, and they’re certainly reflected on this new record.

The new album’s cover art is interesting on its own, but you take it further with augmented reality. Tell me about that.

If you download the app – it’s free and takes about a minute – and then point your smart phone’s camera at our CD cover, there’s an audiovisual component that comes to life onscreen, right before your eyes for 30 seconds. I saw a friend do something similar on Instagram and I thought, “Ohhh, we’re doing something like that for our next record.”

How did The Get Right Band’s collaboration with Marc Maron come about?

We’re all big fans of his podcast,WTF. He’s a guitar player too, but I’ve heard him complain a number of times that he can’t write lyrics. And that struck me as funny, because he speaks so poetically. So I started jotting some of those down; I did that for several months, brought them to the band, and we arranged it and put our own stamp on it. We recorded a demo and sent it to Marc. He shared it on his podcast! So when it came time to make this record, we got in touch with him again and asked for permission to do a “real” version of it and put it on our record. He said yes.

Tags:marc maron, The Get Right Band