The following is a pandemic-era interview with the head of one of Western North Carolina’s best recording studios. — bk

By definition, musicians are a creative lot. So no matter what the style or genre, one is likely to find musicians seeking – and finding – ways to express themselves creatively, even during during a pandemic when live performance isn’t an option. One newer way to do that is live streaming concerts.

But an even more tried-and-true method is recording. While audio recording technology came into being as early as 1857 (thanks to Parisian inventor Édouard-Léon Scott de Martinville), it wasn’t until Thomas Edison patented the phonograph cylinder in 1878 that practical audio recording was available. In the century-plus that followed, the process was refined again and again, making it possible to capture music and other sounds in a manner so realistic that they can barely be discerned from the original sounds. 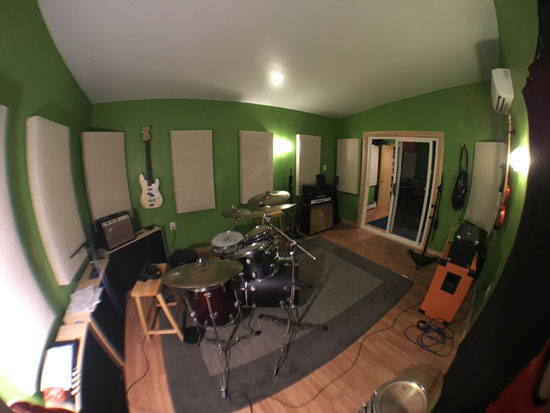 Further advances in technology put quality sound recording into the hands of amateurs and hobbyists; low-cost equipment yielded high quality results. Meanwhile, while recording studios had once been the domain of musicians of wealth (and/or on a record label’s expense account), similar technological leaps made smaller studios a cost-effective option that could still provide excellent recordings.

Today, Western North Carolina is home to around 20 professional recording studios; that figure doesn’t even count the home setups that many musicians maintain. And remarkably, many of those studios continue to thrive in the face of a worldwide pandemic. That success comes back around to the indefatigable creative spirit at the heart of our region’s musicians: if they can’t get onstage in front of their fans just now, many are choosing instead to book time in a recording studio, cutting new musical tracks.

Andy Bishop of Giraffe Studio in Hendersonville says that he’s as busy as ever. “I have not seen a dip in business,” he emphasizes. While noting that 2019 was his busiest year ever, he says that Giraffe Studio, which opened its doors in 2002, is still booking recording sessions months in advance. Bishop is so busy, he says, that if he wants or needs a break to give his ears a rest, he has to schedule a day off. “I never get a free day just because somebody didn’t book it,” he says with a chuckle.

All of that isn’t to suggest that some things haven’t changed in the era of Covid-19. “I’m seeing smaller projects,” Bishop explains. “And they’re shorter.”

A typical recording session at Giraffe Studio in 2020 is likely to involve acoustic musicians or hip hop artists. “With a talented musician, you can get a number of tracks [songs] done in a relatively small amount of time,” Bishop explains. And hip hop is similar in that respect. He says that many artists arrive at the studio with pre-produced backing tracks, meaning that the session consists of little more than synchronizing a vocal track – often “freestyling,” Bishop says – to those musical backing parts.

In Bishop’s experience – and he has worked the recording console for many hip hop artists – “that’s the way rap works 90 percent of time,” he says. A rapper is likely to arrive with “a beat that they’ve purchased, and then we’re just mixing the vocals.”

Even when the process moves quickly, and even when the beats and/or musical backing parts are pre-made – there’s a strong element of creativity happening in the recording booth. Freestyling is a form of extemporaneous rapping that relies almost completely upon improvisation. That means that getting the recording details just right is more important than ever, because no two freestyling performances are likely to be identical. It’s often a case of “capture it or it’s gone.”

And Bishop is adept at capturing those impromptu vocal performances, leading to a steady stream of work for Giraffe Studio, even in a severe economic downturn. “Freestyling is very hip this year. Everybody wants to come in and do it,” he says. Moreover, the solo nature of freestyling means that social distancing precautions are easily put into place. Typically, the vocal artist is in a soundproof recording booth, while Bishop is seated at the recording console in the adjacent control room, the two divided/connected by a sealed plate glass window.

Surprisingly – especially when considering the often reportorial nature of hip hop lyrics – Bishop says that he hasn’t noticed the pandemic figuring into the subject matter of his clients’ music. “I think that will come,” he says. “I just don’t think those songs are here quite yet.”