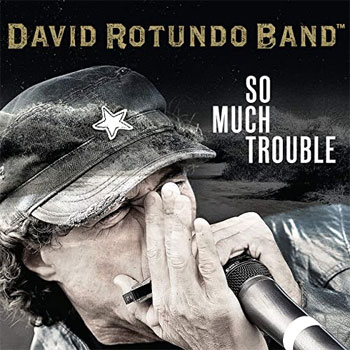 A protégé of Danish harmonica star Lee Oskar (of ‘70s funk-rock-soul group War), Canadian musician David Rotundo sings, plays harmonica and occasional guitar, and writes all of the music on So Much Trouble, his fifth album.

Toronto-based Rotundo launched his first band in 1997, and was first heard on record when he released Blowin’ for Broke in 2001. After extended runs with the Blue Canadians and the Jack de Keyser Band, Rotundo put together his eponymous group in 2003; that same year the new aggregation released Blues Ignited, featuring guitarist Enrico Crivellaro. A well-received 2007 set, Live at Roc ‘N Doc’s served as a document of the band live onstage. After 2009’s No Looking Back, fans of Rotundo’s music would have to wait more than a decade for a follow-up.

So Much Trouble is a showcase of the breadth and depth of Rotundo’s musical vision. Co-produced by Oskar, the 12-song set features swinging, uptempo blues “She’s Dynamite”), searing, soulful, slow jams (“I Must Be Crazy”), stripped-down country blues (“Hard Times Coming”) and more.

The record’s title track is highlighted by Ron Weinstein’s lovely Hammond organ and dialogue between Skylar Mejhal’s arena-rock lead guitar and Rotundo’s blues harp. While vocals on most of the album’s first half feature only Rotundo, the second half folds more voices into the mix, to good effect. Of special note is Annie Jantzer’s singing and occasional wordless vocalizing on “Too Blue.”

Throughout the record, Rotundo’s harmonica work is spot-on, and the song arrangements work it skillfully into the mix, allowing space for the other musicians to shine (and occasionally spar) with it. Cellist Phillip Peterson sounds like a full string section on the deep groove “Funky Side of Town,” one of the strongest and best-arranged cuts on the set.

“Drinking Overtime” is either live-in-the-studio or designed to sound that way. Loose and limber, it’s a rollicking good-time number about beer, replete with solo turns on organ and harmonica – and then, after another verse – more harmonica. Saxophone makes a welcome appearance on the smoldering and understated “That Thing Called Love,” one of the album’s eleven originals (the album closer “Trouble in Mind” is public domain).

But the undisputed standout tracks on So Much Trouble are the two that find Rotundo, his band and guest players pulling out all of the stops. “Trying to Find It” won’t ever be cited for deathless lyrical content, but musically, it exemplifies what the David Rotundo Band is all about, and documents the group in the best possible light. The tune and its arrangement may remind some listeners of Southside Johnny and the Asbury Jukes.

After an elegiac, piano-centric number (the gospel-flavored “Foolish Love”), Rotundo and band launch into “Long Road,” a song that builds from a simple start into a soaring, wide-screen production featuring tabla, Latin percussion and no less than ten vocalists. The song itself is a cross between a field holler, gospel, country blues and world music (with a string section). Listeners who stick around through the already quiet enjoyable first ten tracks are richly rewarded with “Long Road.”