Album Review: Too Much Joy — Mistakes Were Made 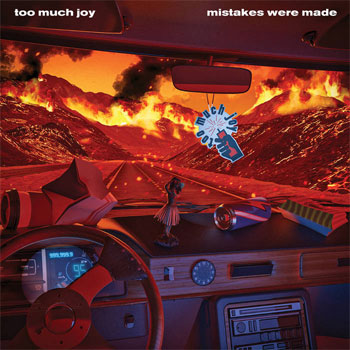 I’m long past the point of being surprised when I discover a new (now to me, that is) group that’s been making great music for years. But I’m certainly still pleased when it happens. I had somehow never heard of Too Much Joy until this CD arrived in my mailbox. As I soon came to discover, the band had already released eight albums (starting with Green Eggs and Crack, way back in 1987 when I was just out of college) and an EP. So 2021’s Mistakes Were Made is my decades-belated introduction to the band.

And it’s a corker. “Blinding Light of Love” has a vibe not unlike prime-era Cheap Trick, but that’s merely one of several musical personalities that Too Much Joy displays. “Uncle Watson Wants to Think” reminds me a bit of Dada or Cracker, which is to say that there’s a ‘90s alternarock vibe to some of this music. But just when you think you’ve got a bead on them, they crank out “Oliver Plunkett’s Head, “which sounds like Green Day with Weird Al on vocals. “Hairshirt” is vaguely electronica-folk flavored; it sounds like a cross between Violent Femmes and Hayseed Dixie.

“Pong” reminds me a bit of Material Issue. “Something to Drink About” has hints of Matthew Sweet and Rain Parade. “Tranq it Up” recalls Fountains of Wayne. The speedy “Snow Day” swings for the fences, arena-rock style. When I hear “Flux Capacitor,” I think ofVelvet Crush’s countrified forays.

All of those name-checks might suggest to you that Mistakes Were Made is a multiple personalty kinda band. And yeah, that’s the case. If you want a bunch of songs that sound like they were all cut at the same session using the same instruments and setting, go buy an Oasis album. If you want ecelcticism and cleverness in your rock diet, heave a heaping helping of Too Much Joy’s latest album.