Kirk Fletcher’s Pathway to (and Through) the Blues, Part Three 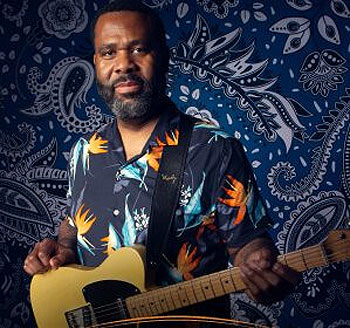 When Fletcher was 13, an affiliated congregation invited him to play guitar with their youth choir. He recalls thinking, “Okay, someone wants me to come join something else. It’s not just at the church where my parents and everybody I know is.” He looks back on that opportunity as an important turning point in his musical journey. “That was really big for me,” he says.

Fletcher continued to discover, listen to and learn from the best guitarists. “I got into Stevie Ray Vaughan when I was in high school,” he says. “I really liked him, B.B. King and all of the main ‘food groups.’ I was just a sponge; I liked all those guys. I just like guitar, but the blues spoke to me more than anything else.”

As much as he enjoyed the pop music he heard, the blues resonated most deeply. “When I heard Howlin’ Wolf for the first time, ‘Little Red Rooster’ or something like that, it kind of sounded like my dad when he was excited in church, giving a sermon.” But there was an important difference. “It was a little bit freer,” he says. “Because the blues was about more things than just religion, God and all this super holiness kind of thing.”

Fletcher’s appreciation for multiple styles of music would serve him well as he grew toward adulthood. “I always kind of had to fit in into whatever was going around,” he says. So he applied his guitar prowess to most every kind of music. “I was always the kind of musician who thinks, ‘This guy’s playing funk, so I’m going to play funk.’ Because it’s music. I come from this really positive, beautiful experience with music, and you just share it with everybody. I’m a born accompanist.”

That approach characterized his attitude toward playing once he moved beyond the church. He even played hip-hop. “Up until a certain point in my life it was like, ‘I’ll just be the one to fit in, because nobody fits in with all of the stuff that I like.’”

Fletcher recalls another turning point, one that took place in 1988. “My brother said, ‘I have two tickets to the Long Beach Blues Festival.’ I was ready to pass out then; I was so excited!” Albert Collins was the headliner, and the bill also featured The Staple Singers with Roebuck “Pops” Staples. “I still get goosebumps, talking about it to this day,” Fletcher says. “To be 12 or 13 years old and to see that?” He says the experience changed his life. “I wrote papers about it in school and everything. That’s the day I decided, ‘Someday, I want to do that!’”

Meanwhile, he was still playing at churches, and those experiences led to others. “When you get a little older, you start to meet some people that play R&B, funk and top 40,” he says. “And that’s how I made the transition into it.” 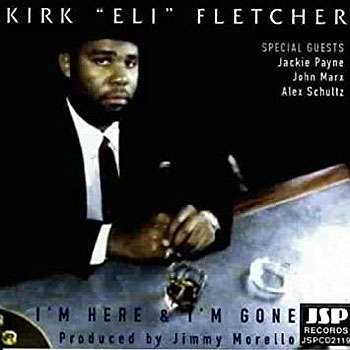 In his early 20s, Fletcher met bluesman (and veteran of countless Ash Grove appearances) Al Blake of the Hollywood Fats Band. “We were playing R&B at a gig at Los Angeles City College, and Al was there playing solo acoustic guitar and singing,” he recalls. “I think he said something like, ‘Man, I like the way you play guitar.’ For him, to see a young black guy playing some blues, he was intrigued. So we connected, and he invited me to his house to play records. He really took me under his wing.”

Fletcher would head to Blake’s place in Laguna Beach every Sunday after church, and he’d learn about country blues and more. “From probably two or three o’clock in the afternoon to eight at night, he’d play me everything,” Fletcher says. “I knew about the more well-known guys like Lightning Hopkins, but he really opened the door to a lot of things that I didn’t know about. To have a mentor to tell you about all these obscure guys that you’ve never heard of was invaluable to me.”

Fletcher says that his time with Blake helped him progress from not really understanding how traditional blues works, to accompanying a harmonica player and understanding Chicago blues. But those lessons weren’t always easy. “I will pat myself on the back a little bit,” Fletcher says, emphasizing that it took “a lot of hard work and a little bit of talent.”

The experience transformed Fletcher, who still maintains a deep friendship with Blake. “I sold all of my records that weren’t traditional blues,” he says. “Al was instrumental in telling me about the history of blues and all different sides of it so I could connect that with my family from Arkansas.” He soon came to a realization: “It was so natural for me to play traditional blues, so I said, ‘Enough with all the other stuff; I can come back to that some other time.’”

Despite their attitudes toward secular music, Fletcher’s parents were as supportive as they could be. “They had their beliefs and everything,” he says. “But when people get older, it seems like they loosen up and they think about things in a different way.”

Because Kirk was still living at home in 2001 – he was only in his mid-20s – when he started playing out-of-town gigs with Charlie Musselwhite, his father would regularly drive him to the airport. And even earlier, when he found himself short of cash when working on demo recordings for what would become his debut album (1999’s I’m Here & I’m Gone), he asked his mother to help out.

“She was like, ‘Well, you know, the Devil’s music’ and everything like that,” Fletcher recalls with a gentle laugh. “I was like, ‘Mom, you know, just like you all sing all these songs that I played and accompanied y’all, I’m doing the same thing with my music. I’m just talking about life.’” His mother gave him the money he needed. “She said, ‘Hey, do your best.’ I’ll remember that for the rest of my life.”