The Krüger Brothers: It’s Not That Far from Western Europe to Western North Carolina

The trio formed by Swiss musicians Jens and Uwe Krüger draws inspiration from the American bluegrass and folk music of Bill Monroe, Doc Watson and others in the lively acoustic traditions. Adding their own unique spin, the brothers (plus American bassist Joel Landsberg) have wowed audiences worldwide.

Starting with their 1995 debut Behind the Barn, The Krüger Brothers have released 19 albums; Roan Mountain Suite from 2017 is their latest. Those albums explore the rich musical heritage of America, filtered through the European sensibilities of Jens and Uwe. “We grew up with a very big variety of musical styles in Switzerland, from all the countries around us: Germany, Austria, France, Italy,” says Jens. “In the end, when you choose your music, you relate it to how you grew up. So I think that is an influence that we definitely have in our music.” 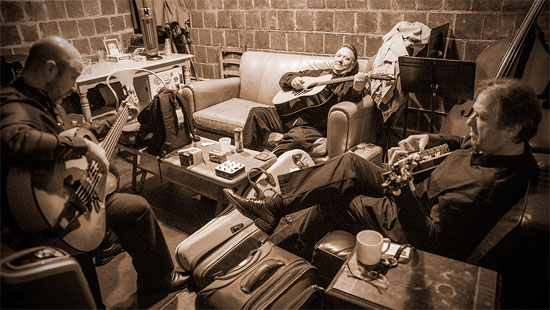 The brothers got their start as buskers, playing for passersby on the streets of European cities. That experience colors and informs the music they make today. “Since [we were] kids, we saw how important it is to reach out to people emotionally with what we do,” Jens explains. “And I think that is a big influence of how we treat our audience. I think [playing] on the street is a good ‘school’ to see that you have to be a contribution to society.”

That perspective was one of many things the Krüger Brothers found they had in common with their hero Doc Watson. “We talked about that a lot with him,” Jens says. “Because he’s played on the streets for years. His family [initially] wouldn’t do it; they would just sing the ballads at home. But he would sing the ballads in the streets, engaging people.”

And that makes a world of difference. “When you sing on the streets, you start to sing in a different fashion,” Jens says. “It’s not just a recital of something; it becomes a performance. And it’s like having a conversation [with the audience].”

Jens and Uwe moved to the United States in 1997. But rather than settle in one of the country’s bustling music hubs – New York City, Nashville, Los Angeles – they chose Wilkes County, North Carolina, home to the annual MerleFest. “We started our tours from here, and we got to be friends with a lot of people from around here,” Jens says.

And they discovered that in addition to the region being highly fertile ground for folk music, it’s also logistically attractive. “Here, we are in a 12-hour circle of 150 million people,” Jens says. “Travel 12 hours one way and you are in Toronto; 12 hours the other way, you’re in Miami.” But practical concerns aside, they simply love North Carolina.

“The landscape here in western North Carolina is just outstanding. Life quality is just really top-notch,” Jens enthuses. “So, for us this was actually a no-brainer. “It’s just so beautiful, and people are really nice. This is one of the good spots on the earth.” He says that his children – then pre-teens who didn’t yet speak English when they moved here – were “warmly welcomed, hugged and greeted” by their public school classmates and teachers.

Jens and Uwe Kruger encountered many other pleasant surprises once they became established in the U.S. “It was beautiful to see how genuine the music is,” Jens says. “When we met people like Doc Watson and Tim Howe, we found that they were as nice as you would think they were when you listened to their music.”

Another surprise: “We discovered that we could play our own compositions, and they were actually liked as much as the traditional music that we played,” Jens says. “We realized that in America, people appreciate a contribution to the culture.” And he loves American audiences. “If you are honest and heartfelt – even if the result wouldn’t be good – American audiences will appreciate the effort,” Jens says. “And that’s very beautiful.”