This feature was first published in Bold Life Magazine.

Seth Walker was born in a tiny town – really tiny – and was trained from an early age in classical music. So the fact that he ended up playing his own steeped-in-the-blues music is a bit surprising. But to the North Carolina-born songwriter and guitarist, it all fits together. And it’s all part of his ongoing musical journey, one that continues to lead in even more unexpected directions.

Growing up in the 1970s and ’80s in Altamahaw Ossippee, North Carolina (pop. 996), Walker absorbed the best qualities of small town living. “I’ve always loved simple music and songs that had depth.” But as a child, he was focused on a very different tradition. He studied violin and cello; his parents taught the Suzuki method. 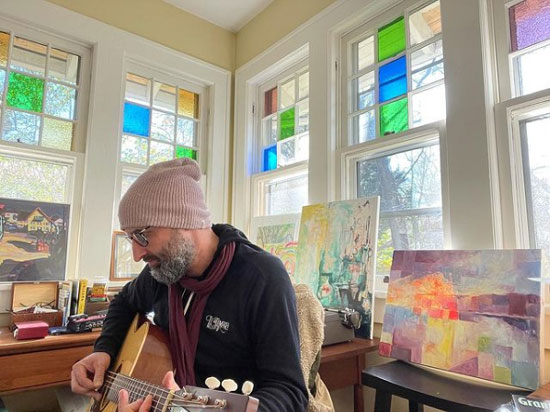 Classical music and a rural town might not seem to go together, but in Walker’s family’s case, they did. “My father had been teaching music in Burlington,” he recalls. “My parents befriended another couple who were looking at buying land way out there. After seeing 20 acres of beauty, they decided to build one home and live communally under one roof. A grand idea; a bold, forward-thinking one tinged with a long-haired hippie vibe,” he says. “It was 1974, after all.”

Once he was in college, Walker discovered the modern electric blues of artists like Stevie Ray Vaughan, Eric Clapton and Jimi Hendrix. The music of those artists led him back to earlier blues legends.

“It really struck a nerve,” he says. “I bought a cheap Stratocaster, and I just sat in my dorm room bending strings. I remember how good it felt that [the music] wasn’t on a page; I don’t even know what it was, but I knew that it was speaking to me.”

Things proceeded quickly from there; by 1998 he had recorded and released his debut album, When it Rains it Pours. Walker concedes that his music doesn’t always fit neatly into the stylistic box that is the blues. “Whether it’s called the blues or not, it comes from there,” he says. Noting that other styles like jazz are rooted in the blues as well, he suggests that his musical inspiration “may be as simple as emotion.” Blues is more a feeling than a genre, after all.

But Walker didn’t abandon his background in classical music. Instead he used it as a foundation to make better original music. “As I started to get into [guitar], I realized that my fingers had been on strings for so long,” he says. “And as I started to dive into blues, I leaned more toward the jazzy side: people like T-bone Walker, Clarence “Gatemouth” Brown, Louis Jordan and Charlie Christian.

The relative sophistication of their music – compared to straight-ahead 12-bar blues – appealed to Walker. He found that he was drawn toward music that displayed “a little more harmonic depth,” he says, noting that “classical music is centered around harmony. So that definitely came in handy.” And the rhythmic complexity of classical music influenced him to write blues-based music that colored outside the lines as well.

All those qualities are reflected in Walker’s music. Released in 2019, Are You Open? is his tenth full-length release, and shows him crafting songs that fold in elements of rhythm and blues, soul and rock. He’s a modern artist, a fact underscored by his approach to making the new album. Rather than beginning by composing a lyric, a guitar lick or a melody, he employed rhythm tracks as his starting point.

“It was unknown territory for me,” he admits. “Most of the tunes started off with one-chord or trance grooves.” He says that using an unfamiliar approach to composition yielded unexpected results. “I’ve found myself surprised more on this album than any other I have ever done,” Walker says.

Are You Open? is a departure from Walker’s previous work in another way. It finds him venturing into the kind of lyrical territory he’s largely avoided in the past. Though he doesn’t think of it as such, Billboard Magazine characterized “No More Will” as a political song.

“It was pretty personal for me,” he admits. “Because I’d never really written any kind of topical piece. I wanted to [address] all that’s surrounding us and affecting our society in such a sad and harmful way, but I wanted to talk about without a jagged edge.” Walker’s goal with “No More Will” – and with much of his lyric writing – is to focus on what we all have in common. “We’re a lot more alike than we are different,” he says. “It sounds cliché, but I do believe it’s true: the only answer is love.”