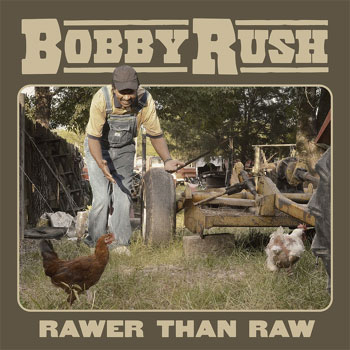 At age 86, bluesman Bobby Rush has nothing left to prove. Recipient of a dozen Blues Music Awards and winner (for Porcupine Meat) of the 2017 Grammy Award for Best Traditional Blues Album, Rush could be forgiven if he chose to rest on his laurels, looking back proudly on an impressive body of work that extends over fifty-plus year period.

It’s quite clear that’s not his plan. His latest album, Rawer Than Raw is steeped in the history of blues, and re-emphasizes Bobby Rush’s place within that history.

Listeners who tuned into Rush’s early singles – exemplified by 1971’s “Chicken Heads” – were entertained by his playful and irreverent approach to songcraft. But a career-spanning 4CD compilation released in 2015, Chicken Heads: A 50-year History of Bobby Rush placed the sillier moments into the larger picture of an important blues figure. Along with his contributions to blues documentaries (an episode of Martin Scorsese’s The Blues, Martin Shore’s Take Me to the River), albums like 2013’s Down in Louisiana and Sitting On Top of the Blues from 2019 serve to underscore the fact that Rush is both a serious student and practitioner of the blues.

That point is hammered home with the release of Rawer Than Raw, a one-man show of an album in which it’s just Bobby Rush, his voice, his acoustic guitar and his trusty harmonica. Recorded – on location, one might say – in Jackson, Mississippi, Rawer than Raw splits the difference between a modern, state-of-the-art recording and the kind of one-mic audio verité document exemplified by Robert Johnson’s King of the Delta Blues Singers. The vibe might be raw, but the performance is polished, informed by a lifetime immersed in the music.

The album opens on its theme with the original “Down in Mississippi,” featuring Rush’s spirited harmonica work that extends after the guitar and voice have finished. The primitive blues of Skip James’ “Hard Times” shows another side of Rush’s blues persona. Rush’s lean, sinewy acoustic guitar leads convey more passion and energy than most electric players can put across with a wall of amplifiers.

Chestnuts like Howlin’ Wolf’s “Smokestack Lightning” have been waxed by countless blues musicians, but Rush makes the nearly century-old song sound as if he wrote it himself. His hypnotic repeated guitar figures are the musical equivalent of a locomotive gearing up for a long journey, and his harmonica evokes mental images of itinerant musicians traveling by boxcar. Rush talks to the listener between phrases, adding an even more intimate and personal feel to the recording.

The song sequence of Rawer Than Raw alternates between Rush originals and blues classics (Johnson’s “Dust My Broom,” Sonny Boy Williamson’s “Don’t Start Me Talkin’,” Willie Dixon’s saucy “Shake it for Me”). But the flow of the songs is such that they all fit together seamlessly as a listening experience. For listeners who can’t witness him live onstage – and in 2020, that’s everybody – Rawer Than Raw is the next best thing to experiencing Bobby Rush in a solo performance.