Beyond the outdoor shows, Keith and the Grey Eagle staff have pursued a few other forward-looking efforts. “We’re actively promoting the nationwide #SaveOurStages initiative spearheaded by NIVA,” he says. “We’ve also been pushing merch and gift card sales, and we just ran a special ‘Golden Ticket’ raffle promotion.” The winner of that raffle will receive free entry to any and all Grey Eagle shows for one year.

The not-for-profit Wortham Center for the Performing Arts encompasses three venues in downtown Asheville with a combined capacity of nearly 700. Prior to the pandemic, the venues hosted about 16 performances per month and drew $1 million in annual revenue via ticket sales, rentals, and fees. A top spot for cultural arts programming, the Center is currently scheduling events with a capacity limited to 25 people. According to managing director D. Rae Geoffrey, the Wortham Center is also scheduling outdoor, drive-in concert and dance events and hosting a virtual party in lieu of its annual preview party. 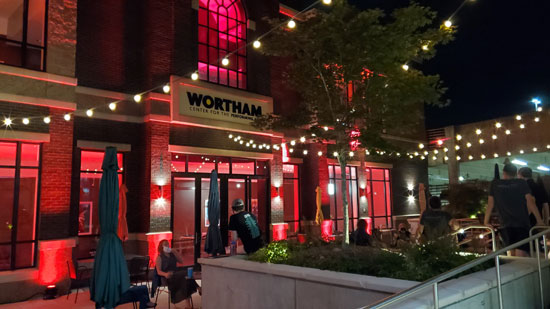 “Overcoming this shutdown—and the associated fear some may have associated with returning to live performances—will be a challenge for venues as they come back to life,” says Geoffrey. “With the support of the community, Wortham will continue to passionately serve our mission to connect artists and audiences.”

The live music community in and around Asheville continues to rally in whatever ways it can. In a show of support and solidarity, a number of local businesses participated in the “Red Alert” initiative on September 1. That effort, under the #WeMakeEvents banner, sought to highlight the threat that the pandemic posed to the business of live music. A wide array of local businesses took part, including Harrah’s Cherokee Center, d&b audiotechnik, The Wortham Center for the Arts, The Orange Peel, Echo Mountain Studio, Asheville Music Hall, Sly Grog Lounge and Salvage Station. The initiative hopes to encourage political leaders to provide economic relief for live music venues. On that September night, those companies bathed their facilities in red-tinted light in keeping with the “Red Alert” theme.

The Big Music Events Continue, but with Significant Changes
With its signature event canceled and its newest venue closed just as it opened, LEAF Global Arts sought financial assistance from a number of sources, but in most cases received nothing or an amount significantly less than requested. But Jennifer Pickering remains focused on the future: “We’ve elevated our mission,” she says, “and we are reimagining all the pieces.” The live music component of that mission now includes monthly events under the “We Love Local Music Night” banner.

The canceled May 2020 festival would have been the 50th LEAF. “We have put that on hold until one day when we will have a 50th celebration,” Pickering promises. The occasion was marked in more modest fashion with VLEAF, a virtual and strictly limited in-person event featuring 40 performing stages; each was roped off to keep visitors (in their cars) at a safe distance. “It was fantastic,” Pickering says. “It was one of the most fun things I’ve done in my life.” The success of that event is likely to serve as a guide for future LEAF live music endeavors during the pandemic, including the 6th Annual LEAF Downtown Asheville, still in development at the time of this writing.

While executive director Meghan Rogers emphasizes the community benefits of the in-person festival, she notes that the experience of going virtual has been a positive one. “I’ve learned a lot about livestreaming and digital events in the last couple of months,” she says. Going forward, “I think adding this option could help us reach a bigger and broader audience and showcase what Asheville has to offer to folks who aren’t here in person.”

Ryan Hargis is co-owner of Arden-based Pisgah Audio Video Lighting, a full-service company that provides gear, support, and expertise to live music events locally and beyond Western North Carolina. He describes his work as “being the team that makes it all happen but never gets seen.” Responding to the new set of challenges posed by the pandemic, Pisgah AVL has been working with local acts and event organizers. “Since the larger bands aren’t touring, [our current workload] has turned into events with regional bands that can easily travel with limited production,” he says. “We’ve been assisting in planning with promoters and concert producers to execute drive-in events, streaming events, and outdoor events with socially distant crowds at reduced capacity.”

For now at least, publicists who help promote live events have had to adjust to the new set of circumstances as well. Danielle Dror of Victory Lap Publicity has shifted her emphasis from festivals and concert tours to events that support local and regional musicians. Prominent among those is the No Contact Concert Series. Organizers have re-purposed a 14,000-sq.-ft. warehouse in Hickory, turning it into a space that hosts livestreamed performances. Unlike musicians-at-home-in-pajamas iPhone videos, these events emphasize production values. Dror characterizes the livestreams, which feature multiple cameras and high definition audio, as “some of the best quality that I’ve ever seen.” Performers include local acts Tall Tall Trees and Fireside Collective, with more to come.

Guarded Optimism Still Reigns
In the end, most in the industry express a mixture of resignation, determination, and guarded optimism, and all we spoke with remain committed to continuing their chosen path of making and supporting live music in Western North Carolina.

Danielle Dror readily admits that she (and everyone she knows in the music community) “would all take our normal lives and normal touring back in a heartbeat.” But she stresses that in some ways, the pandemic and shutdowns have been an opportunity. The pause from live performance gives musicians “an opportunity to think outside the box in terms of what their definition of success in their music careers is.”

“I’m very lucky and am pretty privileged to still be able to count music as my main source of income,” says Christopher Everett, but adds with a rueful laugh, “I had more shows when I was in a cover band as a teenager than I do now.”

Russ Keith expresses a sentiment echoed by nearly all of the region’s music venue owners and managers. “We are going to continue to fight every day to keep the Grey Eagle open,” he says. “I feel hopeful that we’ll make it out on the other side.”

“I’ve been a musician most of my life,” says André Cholmondeley. “And I will continue to be a musician for the rest of my life. But I’m totally ready—as humans have [had to do] for millennia—to have a completely different economic reality when things settle down.”