Bill Kopp: Had you been playing guitar before you moved to Chicago in 1960?

Elvin Bishop: I was fooling around with it in Tulsa. But it was hard to find anybody that really knew how to play the blues. I had learned a few chords, but it was basically like Bob Seger said: “Working on mysteries without any clues.” I’d sit in my room and listen to John Lee Hooker and Lightnin’ Hopkins. It was all my ear could basically handle, because nobody in the family was musical. When I first started out, I remember B.B. King with the horns and what sounded like jazz to me.

So I had a very, very basic grounding in guitar when I got to Chicago. I then made friends with the blues guys who were amazingly friendly and receptive and helpful. I just went into it 24 hours a day and I got out of the “square as a pool table and twice as green” category pretty quick.

You were with The Butterfield Blues Band for several years. The track “East-West” is notable for a whole lot of things, not the least of which is that it blurred genres. It was really out-there. As a guitarist who was coming primarily from the blues idiom, were you perceptive to that track from the beginning?

Yeah, I liked it. Although blues was always my main interest, I’ve always been open to gospel, jazz, anything. In those days we were doing certain things that … kind of opened your mind up a little bit, to put it delicately. But we listened to Ravi Shankar and Ornette Coleman and John Coltrane. Everything, you know? So yeah, it was cool.

But I’ll tell you the honest truth: the only person in the band who hand any kind of clue about Indian music was Bloomfield, and his knowledge was … you know, you don’t really get into Indian music; it takes year and years. But the groove of the thing was based on a common blues thing in Chicago. A lot of times there would be a little revue happening, with a basic band and two or three different front guys; one of them would have a good name. And there was always what they called a “shake dancer,” a girl doing exotic dancing somewhere in the mix. The groove that starts out “East-West” came from that. They would play an “exotic” groove, something similar to “Caravan.” 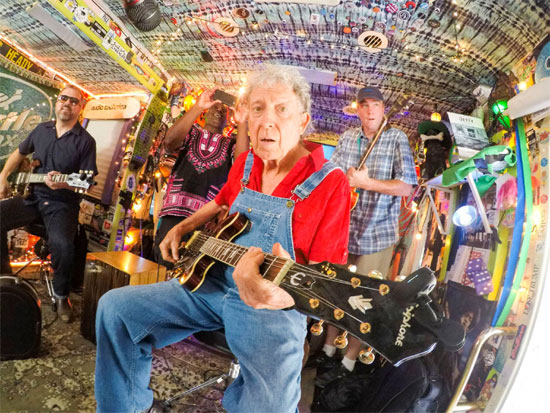 What led you to relocate from Chicago to the Bay Area after leaving Butterfield’s Band?

A lot of things. We got here and there were places to play that weren’t clubs, which was a very new development for blues. Before that it was all playing in clubs or small dances. Stuff like that with big ballrooms like the Avalon and Fillmore West with Bill Graham, Chet Helms. And you didn’t have to wear those damn continental suits and pointed-toed shoes! Didn’t have to watch your back so bad like you did in Chicago. They didn’t have that biting wind coming around the corner at you. Everyone was all friendly; there was nothing not to like.

You’ve played a lot of people over the years. Who is a renowned blues artist that you didn’t get to play with but wish you had, and why?

Sonny Boy Williamson. He was just great, and I liked his attitude and his looseness and the groove he could put on all by himself. And I wish had had a chance to play with Jimmy Reed, but I didn’t.

But I was tremendously lucky in being able to play with guys like … I got a chance to play with Albert Collins several times; he was a great guy. I met all my childhood heroes and became friends with some of them. I’ve been really lucky. John Lee Hooker lived out here. He used to like to see me come home with a bag of collard greens out of my garden or some catfish if I had been fishing.

Is “Fooled Around and Fell in Love” still in your setlist? And if so, who sings it?

I do it once in a while. A guy named Willie Jordan, who plays cajon in my Big Fun Trio, he’ll sing it. It’s a little different from my average tune, but like I said I’ve always been interested in all kinds of things.

To be honest with you, sometimes it takes months to write a song, to file off the rough edges and figure out the final pieces and make it whole together. But “Fooled Around and Fell in Love” came out in under 20 minutes, I think. I remember I was floating around in the swimming pool and just started humming. The song came in my head and bang! I thought, “I better get out and write this down.”

I interviewed George Thorogood about seven or eight years ago. And at one point he was talking about his favorite guitarists, and he named four: Buddy Guy, Duane Allman, Robert Johnson, and you. Are you comfortable being cited as an influence by other musicians?

George is a good friend of mine. He’s always been more than generous. I remember when he got the blast of fame in the ‘80s, he immediately acknowledged guys like Bo Diddley, and John Lee Hooker, and myself. So that speaks well of him.

I talked to him not too long ago. I will tell you one thing about this pandemic: it makes it easy to get a hold of people. Kid Andersen said to me, “I used to screen my calls. But if I don’t pick up my phone now, they know I’m lying!”