It’s Always a Sausage Party with the Polka Brothers

This interview first appeared in the October 2019 issue of Bold Life Magazine.

For a wacky, good-time experience – one that pairs especially well with beer – you can’t beat New York City’s Polka Brothers. The four “brothers” combine classics of the Bohemian dance music with a traditional take on modern pop standards. While they deliver standards like “Who Stole the Kishka” and “Beer Barrel Polka,” they also go off the rails with “polkafied” covers of tunes Ozzy Osbourne’s “Crazy Train.” With semi-traditional instrumentation – accordion, saxophone, electric bass and drums – they cheekily bridge the past and the present, all in the name of fun. Sax/clarinet player Brother Geoff provides additional information about the band and its music. 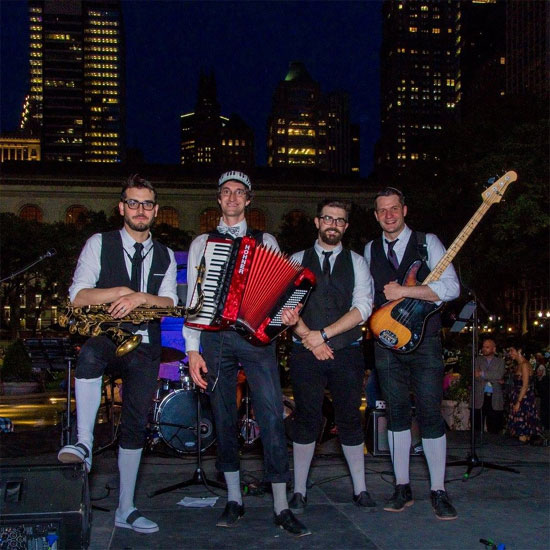 How did the group come together?
We started in college. Brother Matt, our accordion player, was asked to provide music for a “Beers Around the World” party. Matt rounded up a band and sat us down to play some traditional polkas. From there, it’s been 15 years of polka bliss!

From a musician’s perspective, what are the unique demands of playing polkas that set it apart from other musical styles?
Sometimes these days, polka gets labeled as “funny” or “not serious.” But we take the tradition very seriously; we do our best to honor the masters of the music. So many traditional tunes can be technically demanding. Players like Frankie Yankovic and Bernie Witkowski set the bar really high for executing the music with effortlessness and skill.

You reinvent well-known pop songs, recasting them into the polka idiom. Has there ever been a song you attempted to rearrange only to find, “Well, that didn’t work”?
Very few songs don’t work as polkas. We tend to transform the popular songs of today and yesteryear that we actually like to play and listen to, so that really dictates the tunes that we choose to “polkafy.”

Have you ever encountered polka purists who don’t appreciate your modern and irreverent approach?
Many times! And we get it: sometimes at traditional events, folks really want to feel like they’ve been transplanted into Bavaria or to the Czech Republic or wherever their tradition hails from.

How do you deal with those situations?
We want everyone to have a good time, so we make sure to incorporate a large helping of traditional tunes into our sets. That being said, who wouldn’t be irreverent after hearing Eddie Money’s “Two Tickets to Paradise” as a polka, anyway?

What’s one of the most funny or unusual things that’s ever happened at a Polka Brothers show?
There have been many, from fires behind the stage to folks insisting on calling line dances with our mics while we played.

One time we were playing “Who Stole the Kishka?” and I picked someone from the audience to blame for stealing it. I guessed her name was Emily, and I was right! The entire band went nuts. And I don’t think Emily has ever had a better time in her life.

We never did get our kishka back, though.

Most of your gigs are in and around New York City. Do you find that audiences farther afield react to the band differently than at home?
Not so much. Wherever we are, people know that we are there to bring a fun time. From Japan to Mexico, we’ve had nothing but great audiences enjoying the party.

You’re playing at Sierra Nevada Brewing in September; is that the farthest South you’ve ever toured?
No. Mexico would have to be the farthest South. This year, though, we’ll be in Florida; the Triangle Oktoberfest in North Carolina; Williamsburg, Virginia and so many more places. We’ll go anywhere there’s a party!

As a fixture of Oktoberfest celebrations,you’re especially in demand this time of year. How far in advance do you book those seasonal gigs?
Pretty much right away! Come November 1st, things might already be rebooked for [the next year]. So if anyone reading this is looking to party with the Polka Brothers next year, book early and book often!