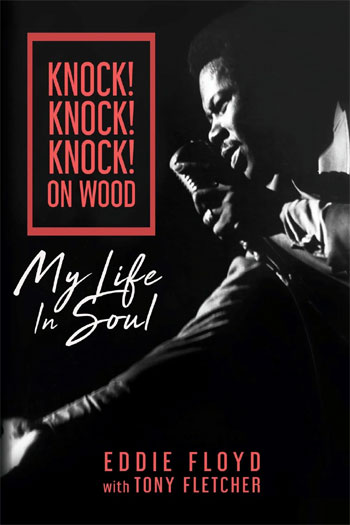 Eddie Floyd is best known for his 1966 hit single, “Knock on Wood.” Backed by the Stax band Booker T & the MGs, Floyd delivered a powerful, soulful and highly memorable performance, one that earned him a place in soul music history. He did a lot more of note before and after, though: he was one of the staff writers at the Memphis label, penning songs that would become hits for Otis Redding (“634-5789”), Sam and Dave, Rufus Thomas, Johnnie Taylor and other greats. He’s remained active, playing regularly in the UK and Europe, where he’s still enormously popular (he was a key figure on the famous Stax Revue back in the day).

These days, Floyd has slowed down just a bit; he celebrated his 83rd birthday in June, and spends most of his time at his farm in Alabama. But over the last little while, he’s found the time to create an autobiography/memoir: Knock! Knock! Knock! On Wood: My Life in Soul (out today, August 10, from BMG Books). Cowritten with Tony Fletcher (Moon and other music biographies), Floyd’s book is a lively trip through a life that has seen its share of twists and turns. Floyd spent a good chunk of his youth in juvenile detention facility, and – this is a tale one doesn’t often hear – he considers himself much better for the experience.

In vivid detail, Floyd charts his life in music, form childhood to present day. It’s a story that bounces around from Alabama to Detroit to Washington D.C. to Memphis to London and beyond, and it’s never less than an engaging story. The book is a breezy read, and benefits from Floyd’s storytelling prowess and keen memory as well as from Fletcher’s added context and focus.

As Floyd told me in an extensive interview (one that forms the basis of a feature I’m writing for Record Collector Magazine), the process of writing the book came down to him telling Fletcher stores and Fletcher writing them. But the author did more; he manages to capture the cadence, the style, the personality of Eddie Floyd’s voice in the pages of the book. Having spent time in conversation with Floyd, I can attest that Fletcher skillfully captures the musician’s essence in the book’s pages.

That, however, makes the very few missteps in the book stand in sharper relief than they otherwise would. As a coauthor, Fletcher clearly endeavors to render himself invisible; Knock! Knock! Knock! On Wood is told in Eddie Floyd’s voice, from Floyd’s point of view. But on more than a few occasions, the first-person storyteller uses the phrase “That’s as may be.” Find me an American who uses that phrase. Go ahead; I’ll wait. (Fletcher is British, by the way.) There’s also a sticks-out-like-a-thumb reference to “high street” shops. We ‘Murcans don’t call ‘em that.

Again, in a less skillfully-written book, the aforementioned unforced errors wouldn’t stand out. But here they do. Still, they don’t take away from the interesting story that Floyd has to tell.

More successfully, Fletcher fleshes out some of the stories in a manner more effective than exposition: he enists other notable figures, quoting them at length to fill in the gaps and provide additional perspective. Occasionally, the transition from Fletcher-as-Floyd (or Floyd-via-Fletcher) to a different storyteller feels like a speed bump, but in the end, it’s an effective way to tackle the material.

As he explains in the book, Floyd isn’t interested in digging up scandal or discussing politics. That’s his right, and since he’s led a scandal-free, largely apolitical life, it makes sense in context. So don’t come to the book looking for any of that sort of thing. Fans of soul music, r&b or the American musical experience in general are encouraged to give Floyd’s book a read.