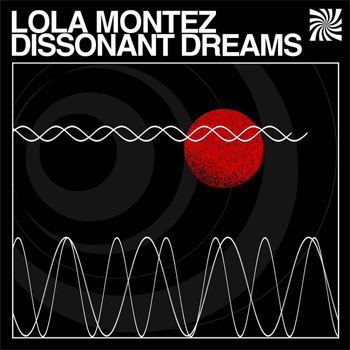 One from the archives: This feature appeared in the August 2019 issue of Bold Life Magazine.

Lola Montez isn’t a singer backed by a rock band. Lola Montez is the band. The Nashville hard rock group is built around the core of vocalist Inga Rudin, guitarist Blake Scopino and drummer Kurt Pietro; depending on where the band is playing, bass guitar duties are the domain of Bryan Walsh or Pasi Nousiainen. The group recently returned from a European tour in support of its second album; the next few months will find Lola Montez bringing its sharp and heavy music to venues in the Eastern and Midwest U.S., including an August date in Hendersonville.

In what was does the new album Dissonant Dreams differ from Glean, the band’s first release?

The songs on both albums deal in outré subject matter and conflict, and the music conveys mayhem. Where do the ideas for the songs come from?

Blake: It starts with me writing guitar riffs and arranging. Then I bring it to Kurt; he contributes drum parts and more arranging. We record a working track of the song and give it to Inga, from which she makes her melodies and lyrics.

Inga, how – if at all – does the character of your previous glam-rock group, Naked Beggars, influence the Lola Montez Band?

Inga: I would have to say, “Not at all,” as I giggle. Nope, none. We create from a whole new slab. We all have our own backgrounds which contribute to the music. However, speaking for myself, I am literally tapping into new things that I have reached for from another level. We all grow, and it’s a great thing. But truly the influence is all its own. The knowhow is the only contributing factor.

The new album features nearly all original material. But you include a version of Jefferson Airplane’s 1967 hit single, “White Rabbit.” What led you to cover that song?

Blake: Inga has always gravitated to that era of music. I suggested we try it in the set because it’s fun, and it translates well live. When we recorded it, we were able to modernize it sonically and artistically, adding our own unique flavor.

Is the band named after the mistress of “crazy” King Ludwig I of Bavaria?

Inga: Yes, the band was definitely named in honor of the dancer, Lola Montez! Her spirit is what captured us. We intend to capture our audience as she captured not only her audience but those that surrounded her.

You recently guested on Genya Ravan’s program on Sirius XM’s Little Steven’s Underground Garage. Beyond the enjoyment of doing a spot like that, do you get the sense that it opens you up to a wider audience?

Blake: You never know who’s listening out there, so we’ve been beyond grateful for everyone who’s been spinning our music.

Nashville used to be known only for country music; today it’s very musically diverse. Do you consider the band to be part of a local scene or movement?

Inga: We have no choice but to be a part of the scene! We love Nashville to death; it’s in our blood, and we play here often. We’re excited to see Nashville expand. It not only makes the music diverse, but the people are diverse as well. When people visit, they must see more than the tourist areas. Nashville is fantastic!

Your promo photos show just three of you: Inga, Blake and Kurt. But you perform as a quartet with a bassist. What’s the story there?

Blake: For logistical reasons, we are currently working with two bassists, one in the U.S. and one in Europe. We wanted musicians who shared the same passion as us. It’s taken a minute to find that, but has been totally worth it.

What’s next for Lola Montez after the current run of dates?

Blake: We’re looking forward to producing another music video. And we’ll prepare for the next run in Europe.